Skip to content
A Rough Guide to Kölner Karneval

After last year missing out on Kölner Karneval (Carnival in Cologne) because I was sick, 2015 was definitely the year to take on this colourful Rhineland tradition. So, without further ado, here’s your rough guide to Karneval in Köln, based on the hard-earned experience of the fortnight previous.

We’ll start off with some simple vocabulary to make your Karneval a less confusing and more amusing experience.

Jeck: This is an important one. Jeck is, in broader terms, an adjective of the Rhineland which describes someone who doesn’t take themselve so seriously and is perhaps a little crazy, but in a good way.  Around this time of year it also refers to a costumed Karneval reveller, who is generally very crazy, in a good way.

Aside from speaking volumes about the tolerant nature of Kölners, this is a good reminder that you need a Karneval disguise. Lack of costume is the only thing not tolerated. 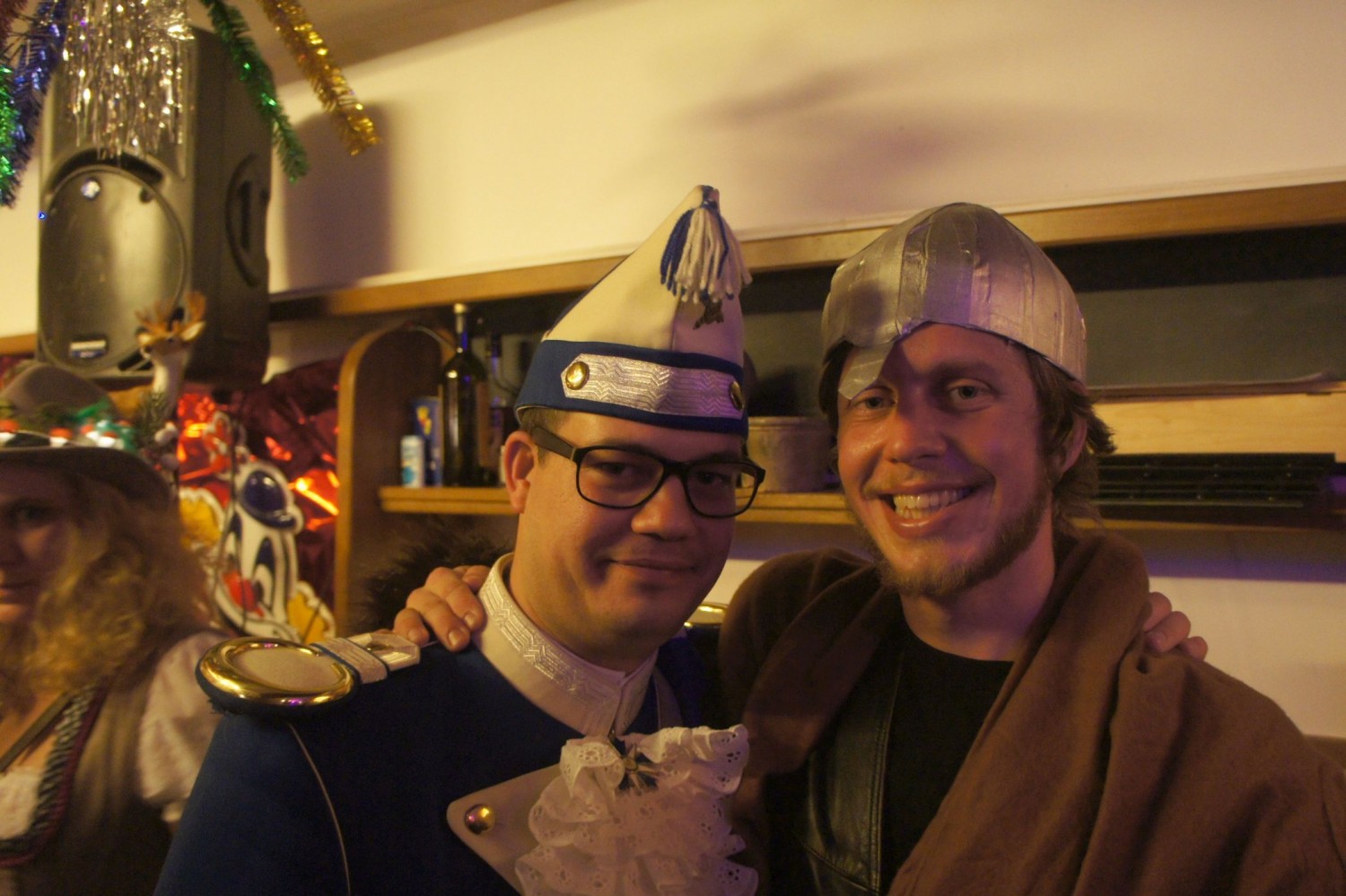 My new friend here on the left has attire typical of a Karneval association member, while I have opted for a winter-proofed viking number.

Kölle Alaaf: You will hear this cried out non-stop at Kölner Karneval; in parades, while toasting in bars and when locals run into each other in the street. Historically, it can either mean ‘Cologne above all’ or ‘everything must go’, the latter of which explains a bit about Karneval.

Karvenal as it is celebrated today is a combination of ancient pagan festivities and the traditional consumption of rich food and drink during wild Catholic feasting, to make sure it did not go to waste during the fasting of Lent. This makes for a pretty bizarre mix of traditions, so simply accept the unexpected when you are there.

Bützje: A Bützje is a light Karneval kiss, usually planted on your cheek, and these fly around willy-nilly, so be prepared! If you find yourself  on the receiving end of one of these, chances are it’s already ‘Weiberfastnacht’. This ‘Women’s Karneval’ day kicks off the celebrations on the pre-Lent Thursday at 11.11am and anyone wearing a tie this day, beware: A tipsy lady with scissors is likely to chop it off in a ritual stripping of power. 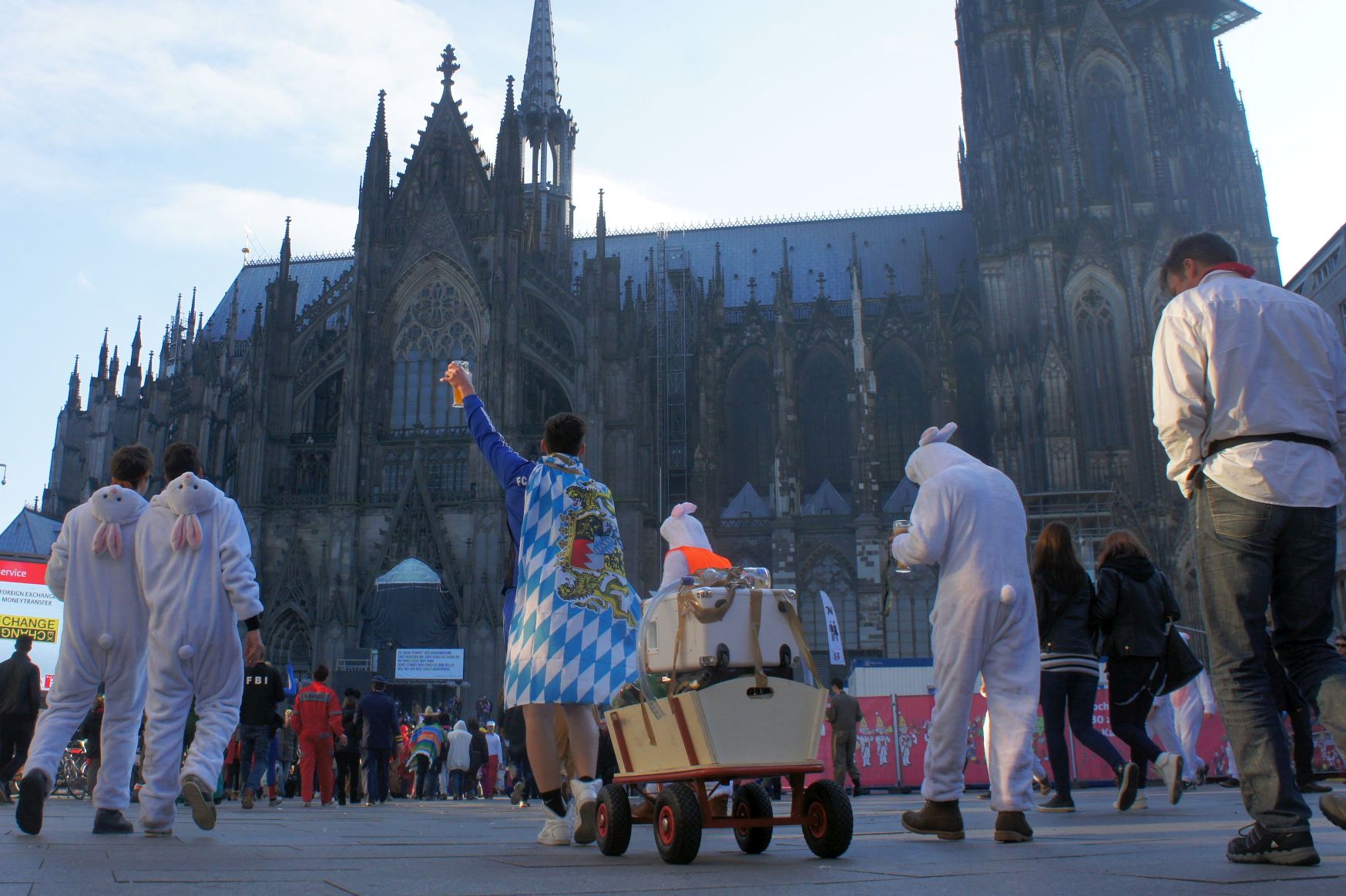 I missed Wieberfastnacht as I had to finish off some work in Berlin, but arrived on the Friday, where unseasonably lovely weather was caressing the pounding heads of those who had been drinking since 11.11am the previous day.

As I found out that evening, Kölsch is the standard Karneval beer of Cologne and this golden-hued hangover agent is dispersed in thin, 200ml glasses, which seem to almost-magically refill themselves.

Don’t be a smart-ass and try to order the Düsseldorf equivalent, Altbier ale. I was told, in no uncertain terms, anyone doing this would most likely receive a fat lip from the bartender instead.

As bland as Kölsch is, it comes in handy by making Karneval music more bearable. Largely intelligible in the Cologne dialect (which, suspiciously, is also called Kölsch), the tongue-in-cheek songs are at least jolly.

Even non-Kölners can take part in singalongs. Simply sway with your neighbouring Jecken and join in on choruses featuring refrains such as ‘Lalalala’, ‘Viva Colonia’, ‘Polka, Polka, Polka’, or by simply repeatedly singing the word, ‘Wassermelone’, as lyrical comprehension does not seem to be compulsory. 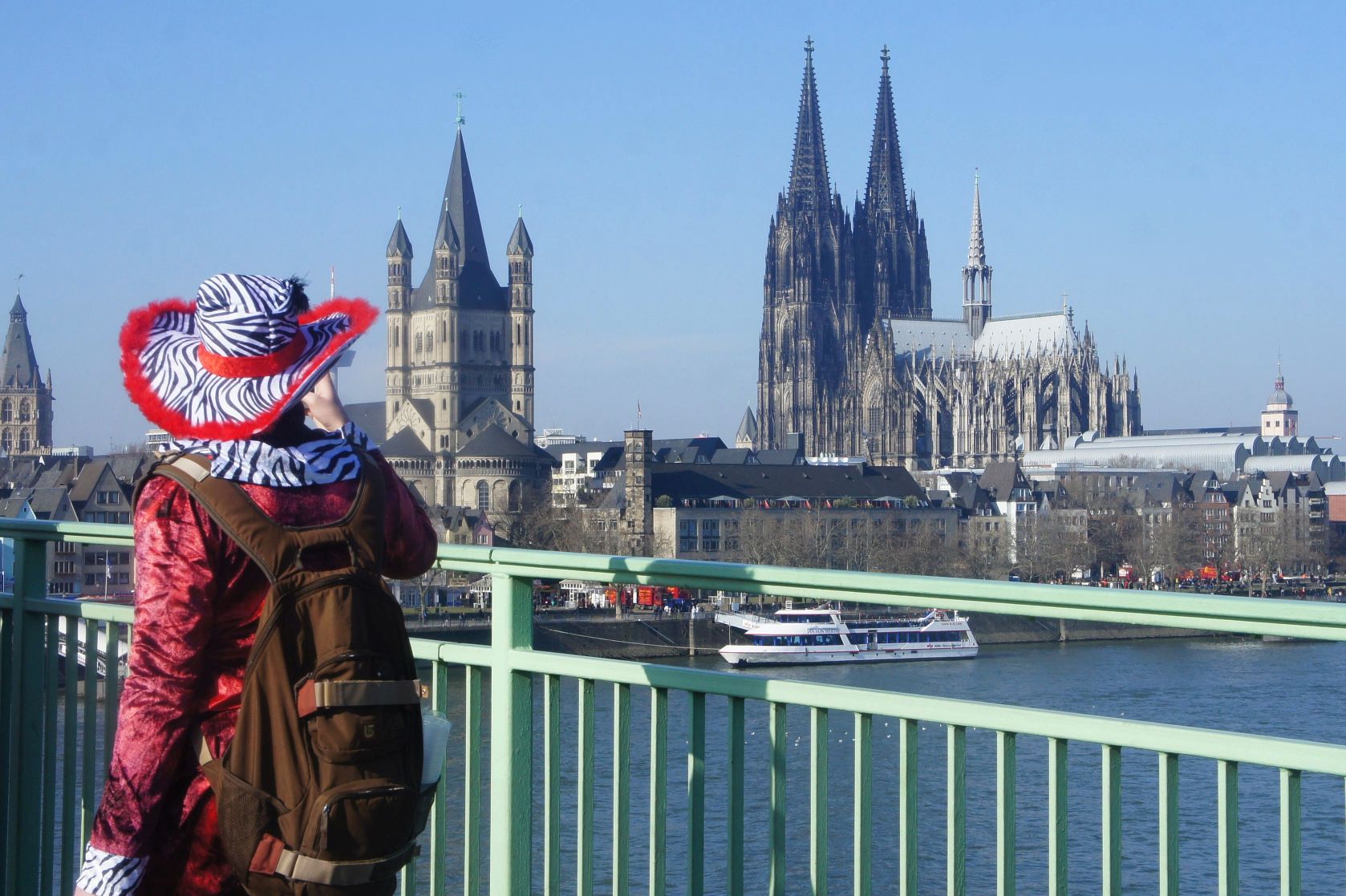 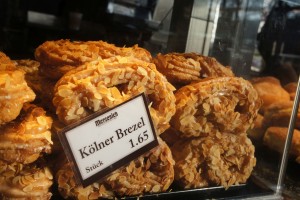 Saturday morning is not particularly notable, apart from the fact you still have costumed bananas left over in the streets from the previous night, refreshing with an early-morning beer, red-nosed clowns in bars which never closed and the all-pervasive Karneval music creeping back as if in a hedonistic groundhog day.

I was there for the long haul, so I took the time instead to gaze up at the grotesque gargoyles and soaring arches of the cathedral, which seemingly by miracle survived the WWII bombing that flattened most of Cologne. A stroll along the Rhine offered a welcome respite from the noise, distinctive views of the city’s historic and contemporary landmarks, and an appetite to sample local specialities, such as Halve Hahn rye sandwiches and almond-studded Kölner Brezel doughnuts from one of the local-staple Merzenich bakeries.

Saturday night heralded the arrival of the Geisterzug (ghost parade), a semi-sanctioned procession of ghouls, demons and spontaneous, dancing participants following the beat of drum corps. The Geisterzug is part of an  alternative Karneval which was organised by youth in the 80s as a political statement against the traditionalism of ‘normal’ Karneval, but the spooky parade has origins in medieval times and is relatively clown-free.

Sunday offered an amusing mixture of smaller parades, apparently designed primarily for small children, and the on-going silliness of many already into their fourth day of partying. 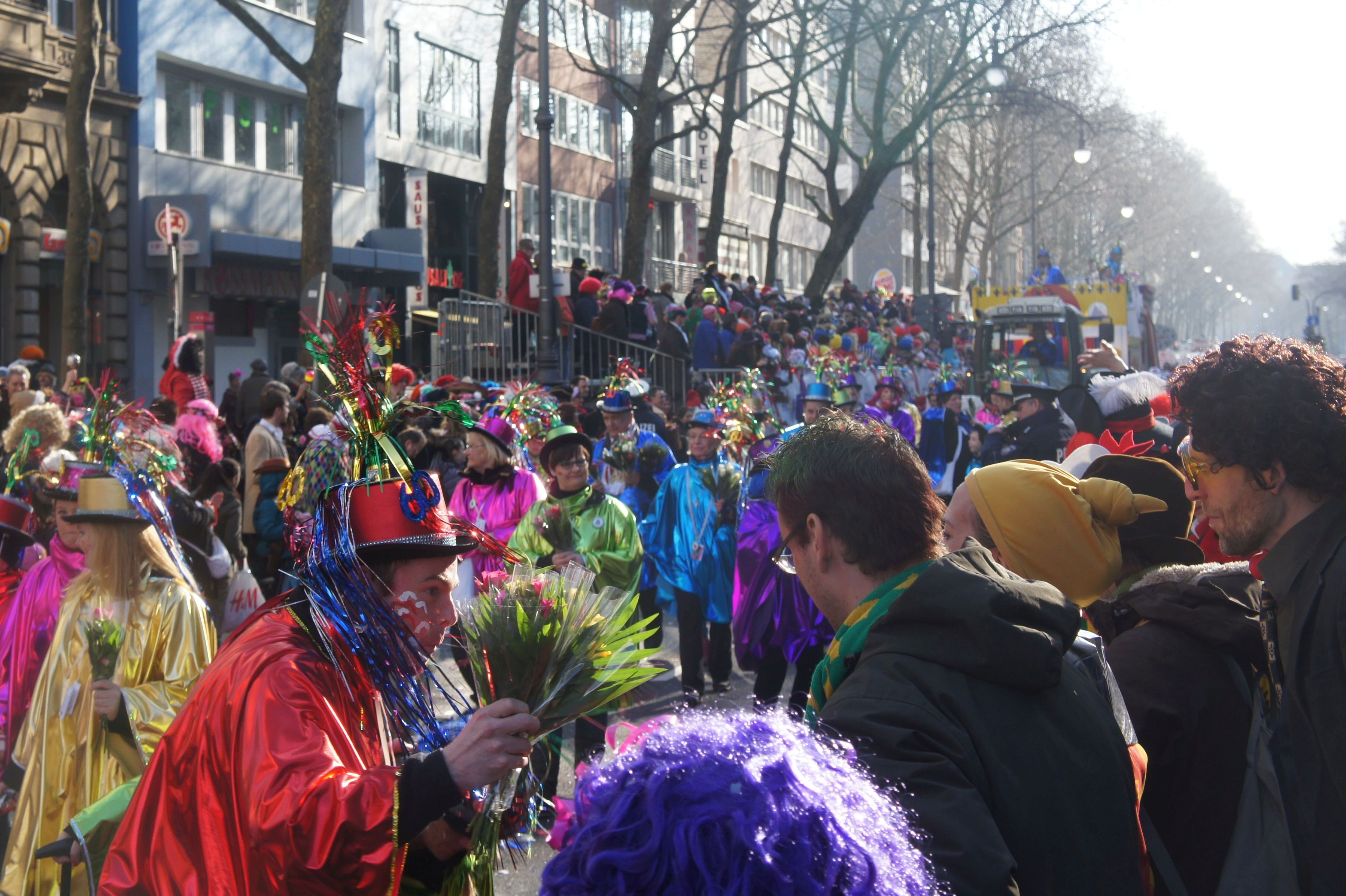 As the gaily-dressed paraders passed by, small fingers grasped up at pro-offered and tossed candy (Kamelle), wrapped flowers (Strüßjer) and other gifts, which were dragged around by the kilogram in hefty tote-bags. The adults were already starting to get stuck into the action too, demanding gifts with a hefty ‘Kölle Alaaf!’. One bemused gentleman down the line was handed a loop of sausage by a heavily-sequined matron.

Even the police officers acting as parade marshalls were happily included in the fun,  many of them with Strüßjer and other presents from the merry-makers protruding out of all available uniform pockets. 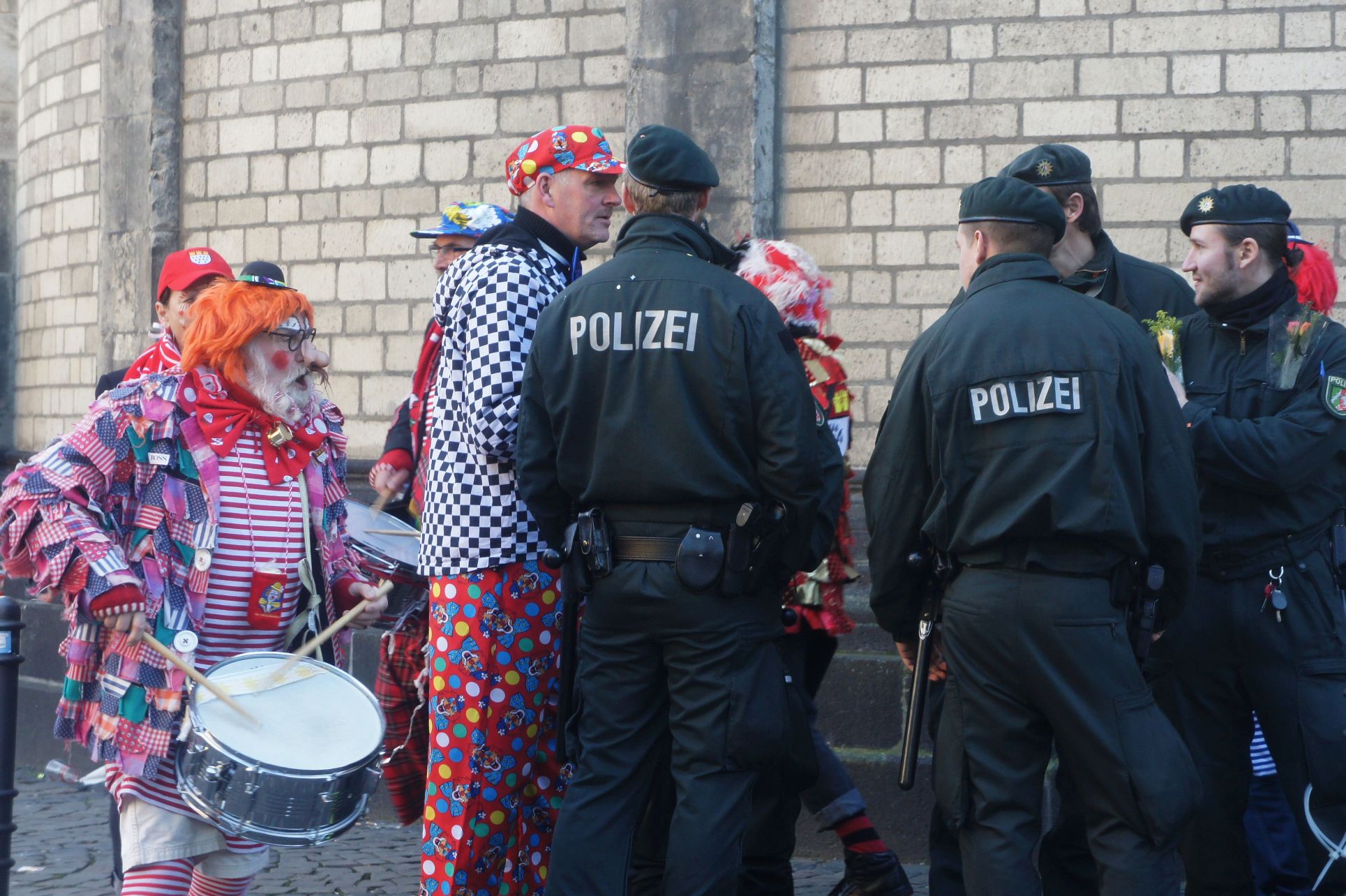 Making sure Die Polizei do not miss out on the fun.

As parades go, this is the big league – the Rosenmontagzug begins at 10.30am in the south of the city and snakes through streets packed with up to a million spectators. Children still line the front of the parade, but the adults have given up pretending they’re not desperate for candy.

The parade’s even so big that when the first satirical floats, bands and Karneval society marchers finish their journey, some have not even begun to run the gauntlet of revellers baying for “KAMELLE!”. 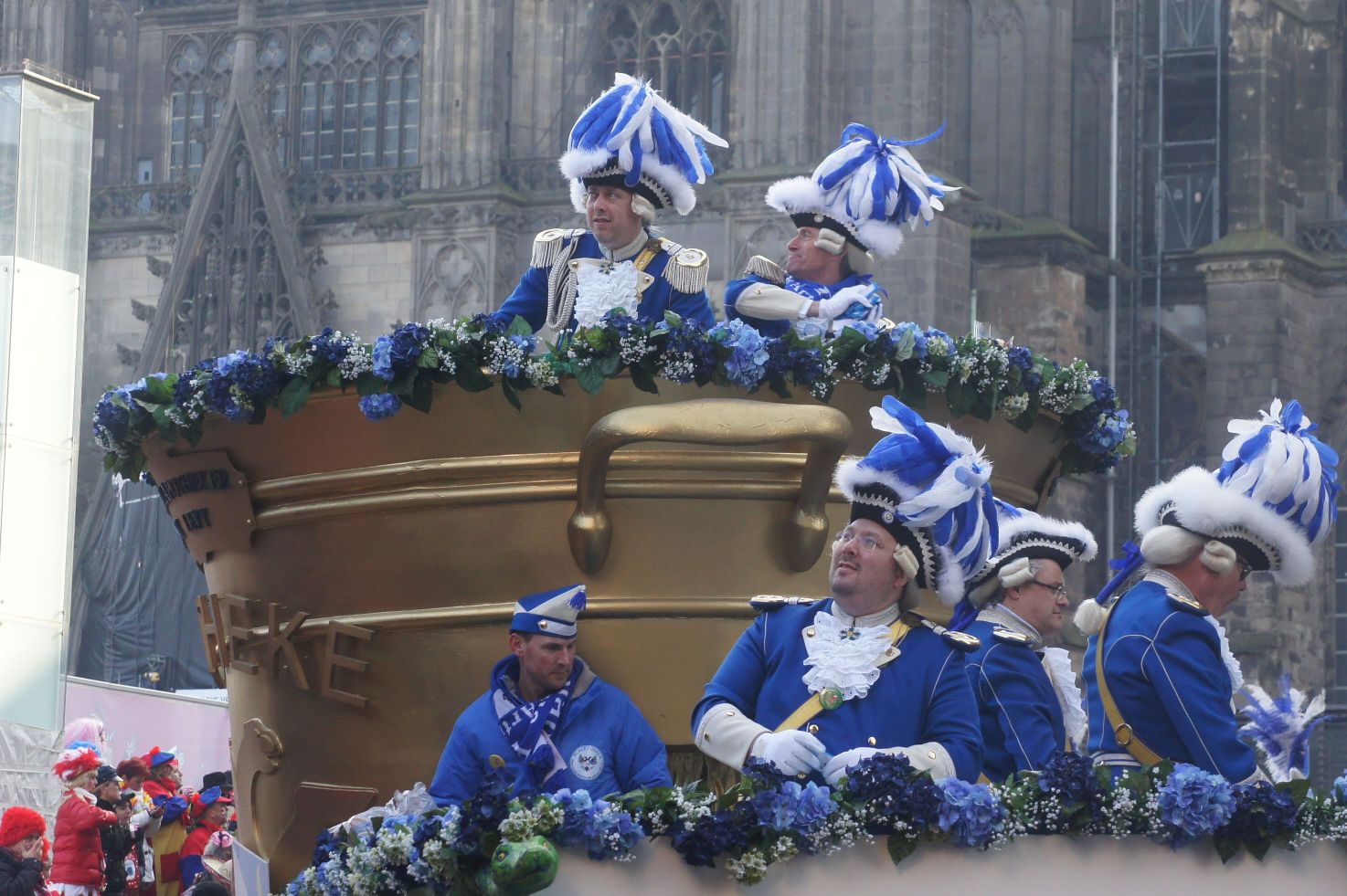 Karneval guild members get ready to launch another salvo of gifts at the Rosenmontag crowds.

Unlike the previous day, they were not handed out with any particular decorum. Fistfuls of gifts were tossed out over the crowd by ‘Funken’- the associations of wigged gents in 18-Century attire – and woe to any fool who was not paying attention when a dense and dangerous gingerbread heart came flying their way.

The Chinese tourist next to me learned this lesson the hard way when he lowered his camera from his gaze, only to be struck immediately in the face by a reasonably-sized block of chocolate. 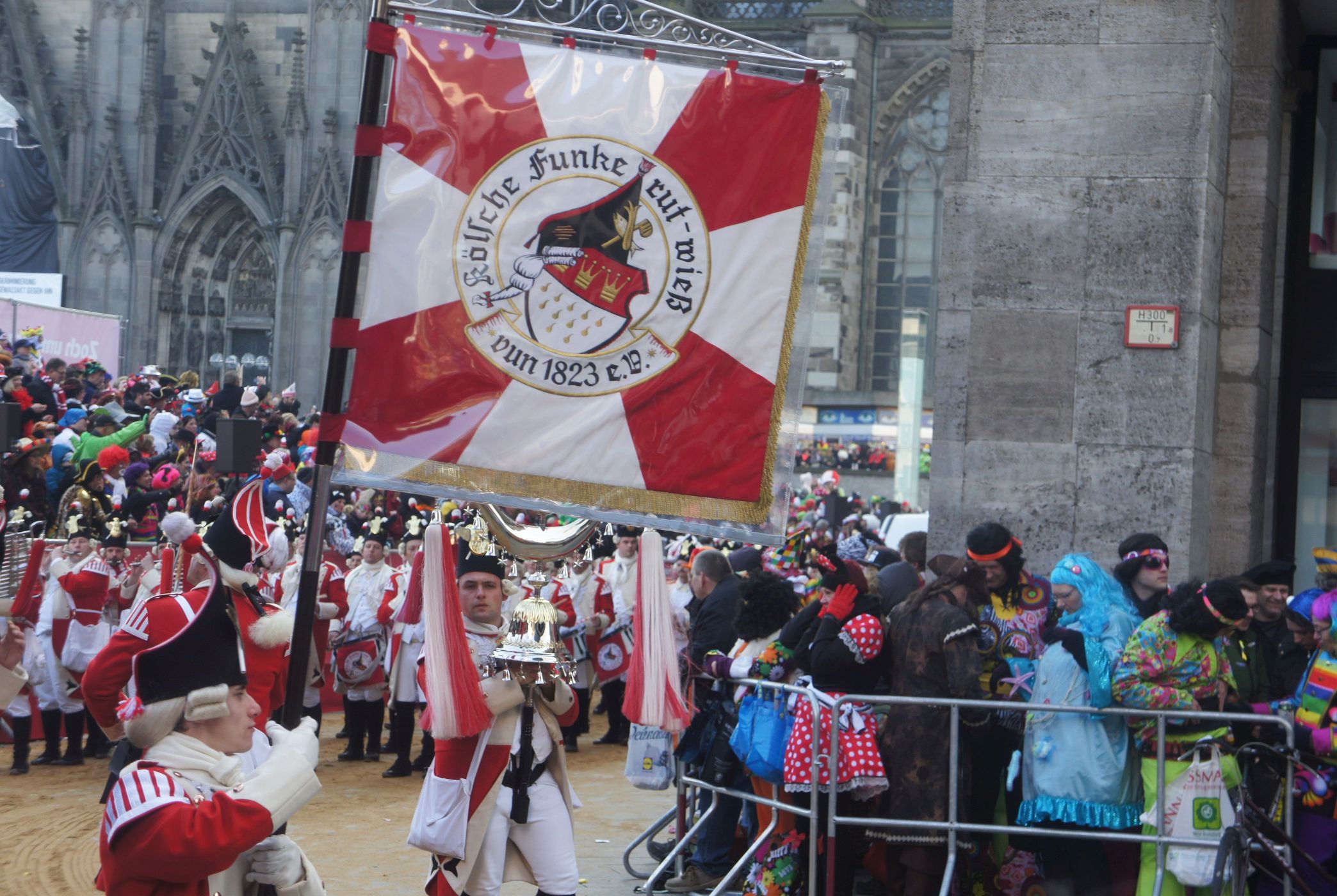 Karneval doesn’t end just because the Rosenmontagzug does. The parades continue the next day and on Tuesday night the Kölners ceremoniously burn a straw figure called the ‘Nubbel’, onto which they project the numerous sins of the previous week.

The following day, everything is back to its normal, orderly self, aside from the hangovers. Everyone gets together for a calm, Ash Wednesday fish dinner and moves on. What goes on in Karneval stays in Karneval.

At least until the so-called fifth season of the year starts again on the 11th of November.

To get the most out of Karneval in Köln, you should ideally know some Kölners.

They will know all about the traditional Karneval the average visitor doesn’t experience, such as the balls and humourous poetry sessions, what on earth the songs are  actually saying and why there is an elected Karneval prince, farmer and virgin (a man in women’s clothing) riding through the parade.

If not,  this is no problem. They’re particularly friendly and not too hard to find at this time of year. Just buy them a Kölsch. 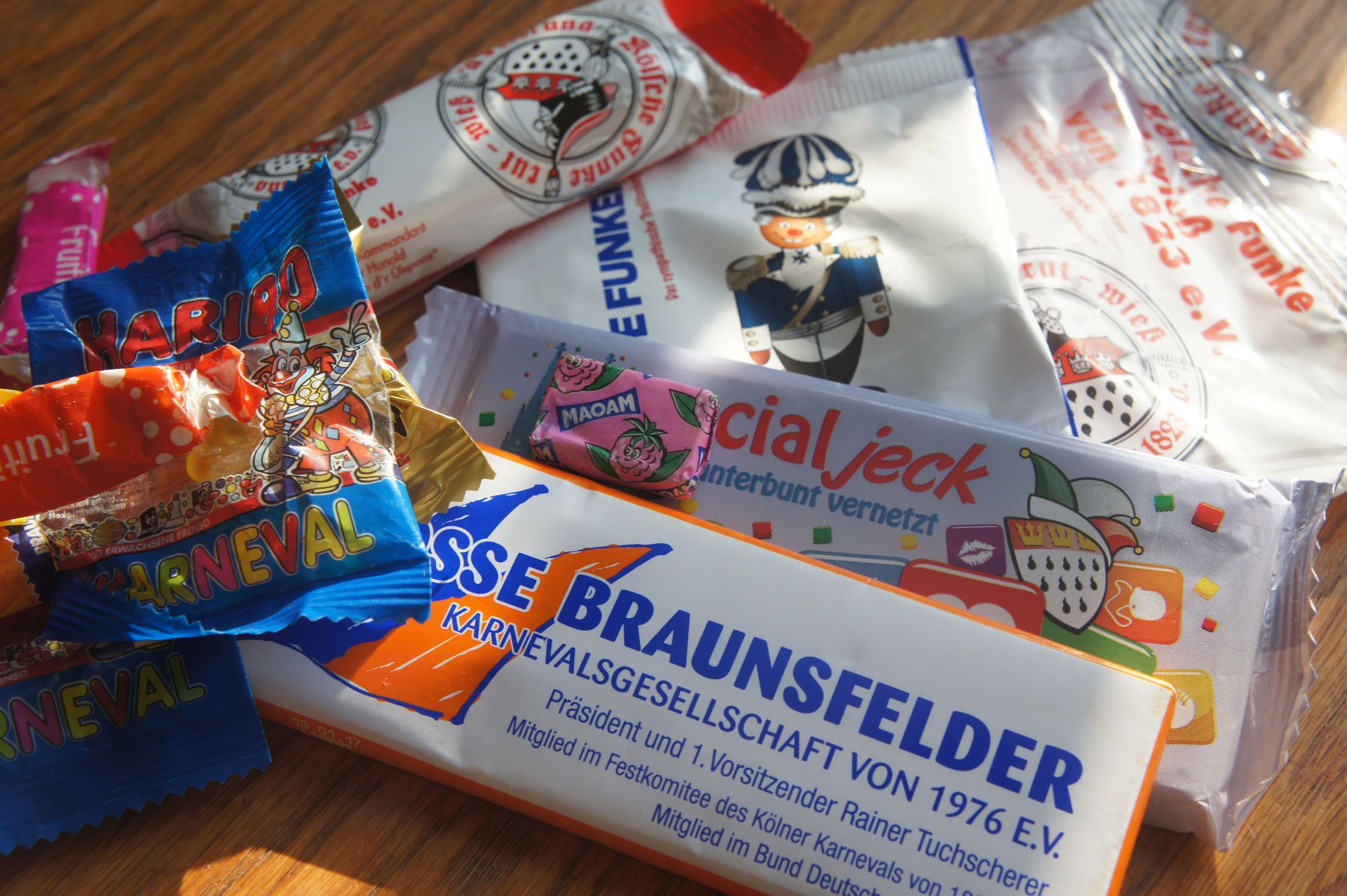