“Save Beer, Save the Planet!” reads like a t-shirt you may buy for a beery beloved, but as I sat in Friedrichshain, sampling a special lager spiked with the sour Berliner Weisse beer, it began to make more sense.

My bar stool belonged to Saturá Bar, a pop-up social enterprise which existed last week for the Berlin Beer Week.

On the next stool, Trent zum Mallen, the bar’s German-American founder, explaining how beer could be better.

So why wouldn’t I be drinking this beer under normal circumstances?

What you’re drinking is an experimental beer, the likes of which normally doesn’t get served, just like most of the other beers in this bar, which are shortly before or after their use-before dates. Which doesn’t mean anything as far as the quality’s concerned — there are actually plenty of beers that taste much better after that date — but the legal aspect of having to have that date is there.

So, 75% of the beer in this bar would have normally been thrown away.

Then how did Satura Bar come into being?

I had the idea to try to save some of it because I’ve been working very closely with food-saving organisations, and I think that beer saving is equally important, as there’s a lot of foodstuff in beer in terms of the grain. We’re also using a lot of water and energy to brew this beer and if you have to pour the beer out, we’re also wasting that.

Perhaps the idea of “Save Beer, Save The Planet” is a bit boisterous, but ‘Save Beer’ is covered, and, ‘Save the Planet’? It’s a partial contribution.

Which is how this ties into your social business, Satura?

My company, Satura, is about fundraising for and raising awareness of climate change and water security issues, and investing that money in social entrepreneurs dealing with water issues, mostly in emerging markets.

To invest in our collective future, I hold creative fundraising events like this: I never had the idea of owning a bar, but I do now thanks to lots of positive feedback this week!

Saved from a wasteful end — an experimental sour lager beer

This isn’t something that we generally think about when having a cold brew. How big of an issue is foodstuff waste?

I’d say it’s a major problem, as agriculture is already hit very hard with more sporadic rainfall and other effects of climate change. This is only going to increase as the population of the planet increases and rainfall becomes more unpredictable, and we already have a very serious problem with providing foodstuffs.

Throwing away food is sacrilege in my books, and lots of food saving programmes exist that use apps and modern tech to save it. This is, in my opinion, the only way we’re going to be able to feed ourselves on this planet; it makes sense not to throw away half of what you produce and beer is a food stock, especially in Germany.

So where is the beer money going?

For the Berlin Beer Week, I decided to focus funding on just one social enterprise, Africa GreenTec. They’re bringing out a new version of their solar container, which goes onto a container ship, then goes onto a truck and can be driven basically anywhere.

You drive this truck into a village with 3000 people, 500km from the next paved road, open up the solar panels and you have three things essential for any village today: internet for money transactions, weather forecasts, and selling your crops; clean energy; and in the newest containers, water purification. 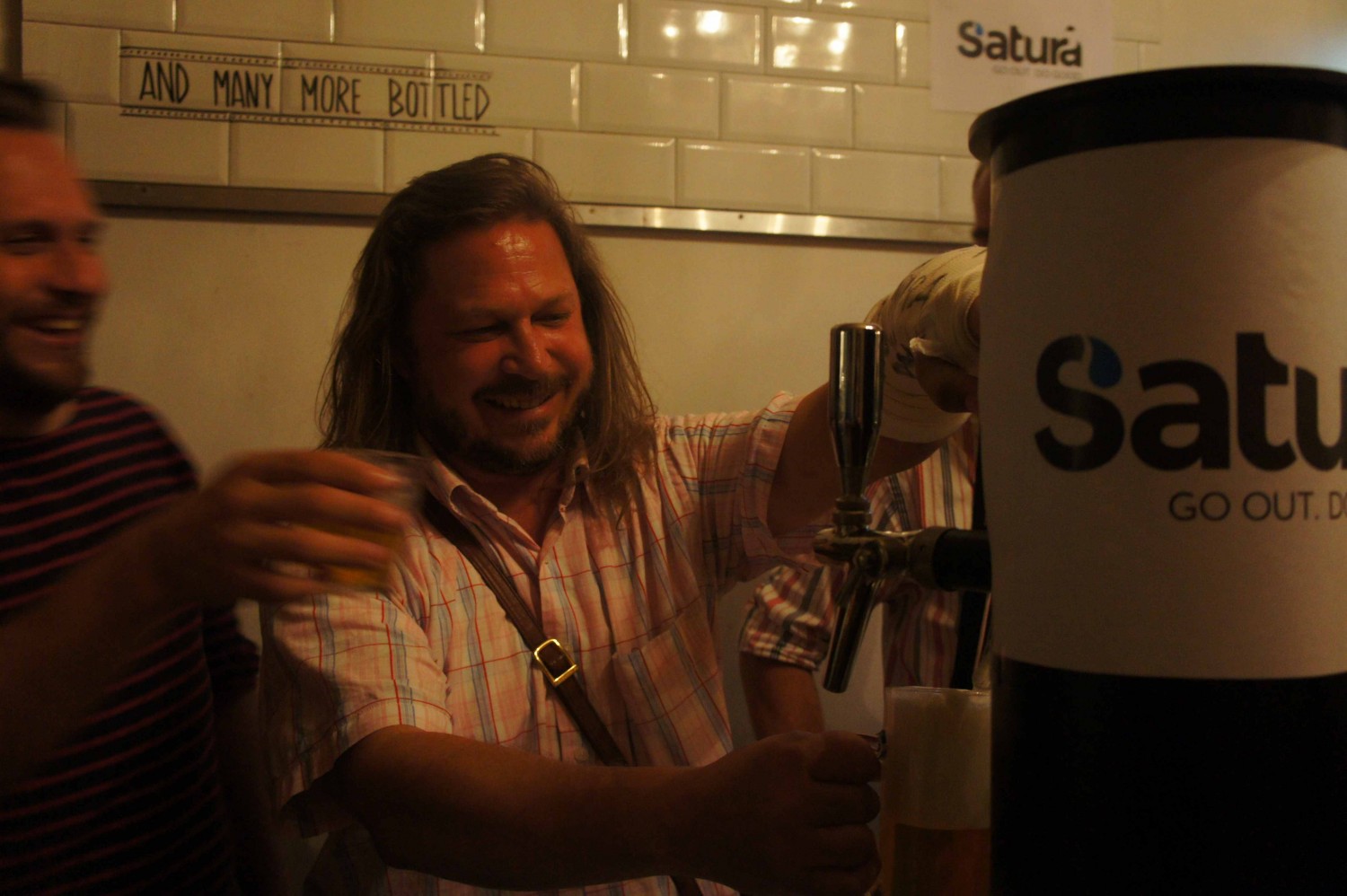 Trent zum Mallen saves some beer behind the Satura bar

How’s the bar experience been so far and what’s the feedback been like?

I had two of Germany’s best beer sommeliers come by and I think they were equally excited to do a beer tasting on expired beer as everyone else was. Some of the nuances were that the beer tasted even better and they were especially excited about some of the experimental brews.

Probably about 50% of people asked me, ‘Are you sure it’s okay to drink?’ But in the last six days, there was not one bottle where we’ve had to say, ‘There’s a problem, it’s off,’ not one. There’s a money-back guarantee, but if you open it and don’t like it, you can get another one, any one you want, until you find what you want to drink.

So Satura Bar is a one-off for now, but where would you like this all to lead?

The fact that this bar materialised almost overnight was a beautiful surprise and what was even more beautiful was the community’s response; the beer distributors who have massive warehouses full of beer, some of which they throw away, the brewers themselves, and interestingly in this experiment, the neighbourhood gastronomy.

The solidarity from the neighbourhood has been fascinating, people walk in and say, “I’ll bring by a keg from the back of our restaurant that we were going to toss!”. Literally, I think if you opened up a Satura bar in every kiez, every neighbourhood of Berlin, the gastronomy around that bar itself would be enough to carry it.

You can watch out for updates from Satura here, and sign up to BlogMercurial posts on the top, right-hand side of this page.