Contrary to appearances, no, I have not vanished off the face of the earth.

Instead, I have just been released from the tender grip of Northern Europe’s biggest music festival, Roskilde Festival. On Saturday, 29 June,  two Kiwi friends and I entered the 80 hectare camp site. We wouldn’t depart until Sunday, July 7, absolutely exhausted but reluctant to leave what had become the fourth biggest city in Denmark for a week. 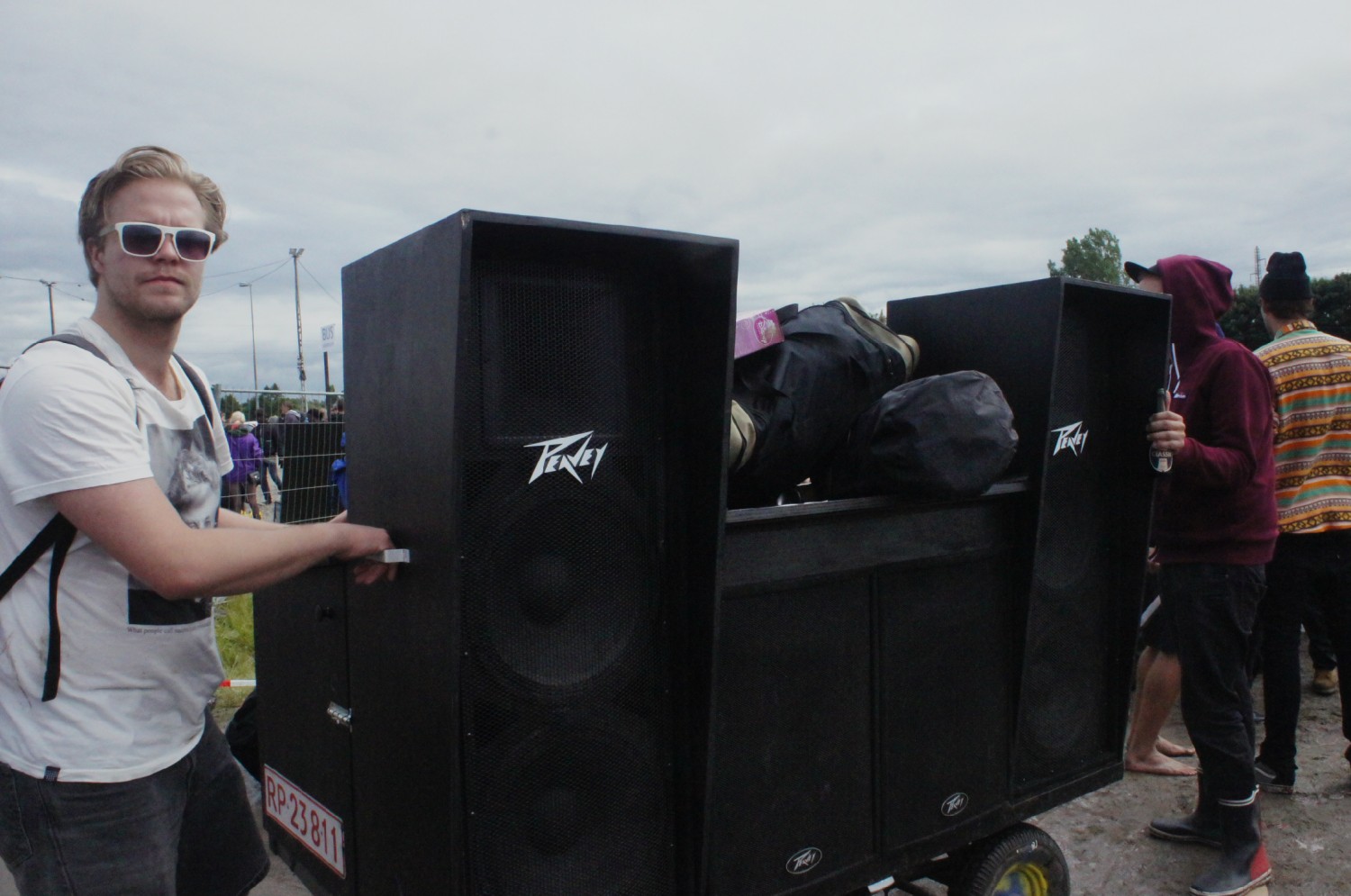 The Speaker Stacks Roll In

We were only three of the 32,000 volunteers that make up the 100,000 or so festival-goers who visit Roskilde every year. I guess the upshot of this is almost every single person at the festival, including everyone behind the service desks, is working for their ticket and really wants to be there and there is a serious loyalty to the festival, which seems to hold a special place in the heart of Danes.

The appeal? Festival organisers like to market something called the ‘Orange Feeling’, an atmosphere peculiar to Roskilde Festival which draws aficionados back every single year, sometimes for decades in a row. In many ways, I think this idea stems from Roskilde’s ‘warm-up’ period. While the main scheduled music line-up doesn’t start until Thursday night, the campgrounds open on the previous Saturday evening. 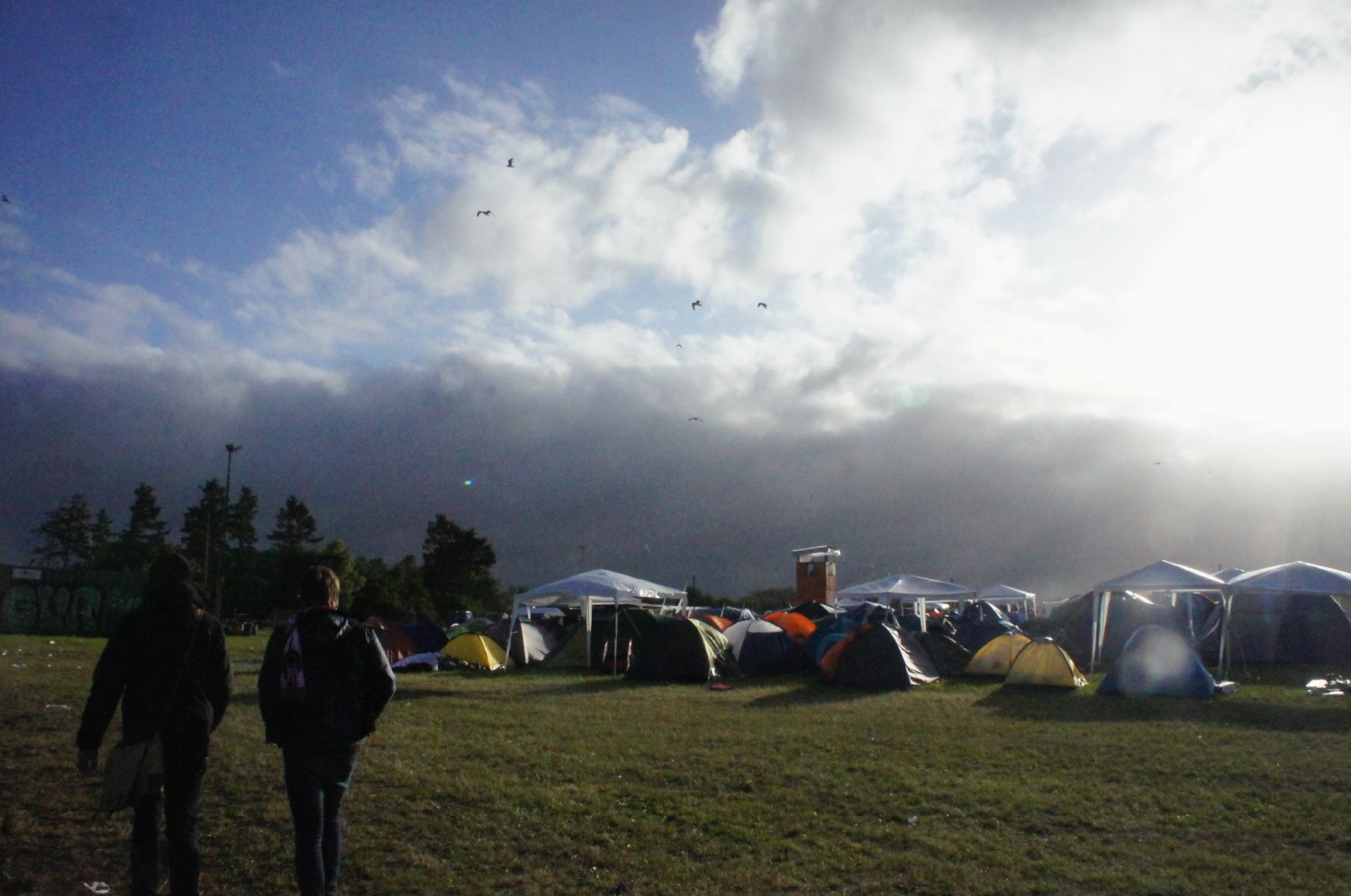 Crowds even camp out IN LINE a day beforehand in order to claim the best camping sites in the festival and when the gates open, groups send sprinters barrelling into the green grounds to stake a claim (if the fences have not already been broken down by impatient campers, as happened this year). And then? Then something a little bit magical happens.

Friends start bringing their campsites to life,  something people put a ridiculous amount of effort and planning into. These campsites merge with other campsites, neighbours get to know their neighbours (far more than ever happens in real life, unfortunately), massive portable soundsystems cough to life after a year in storage and a user-created festival within a festival is born. 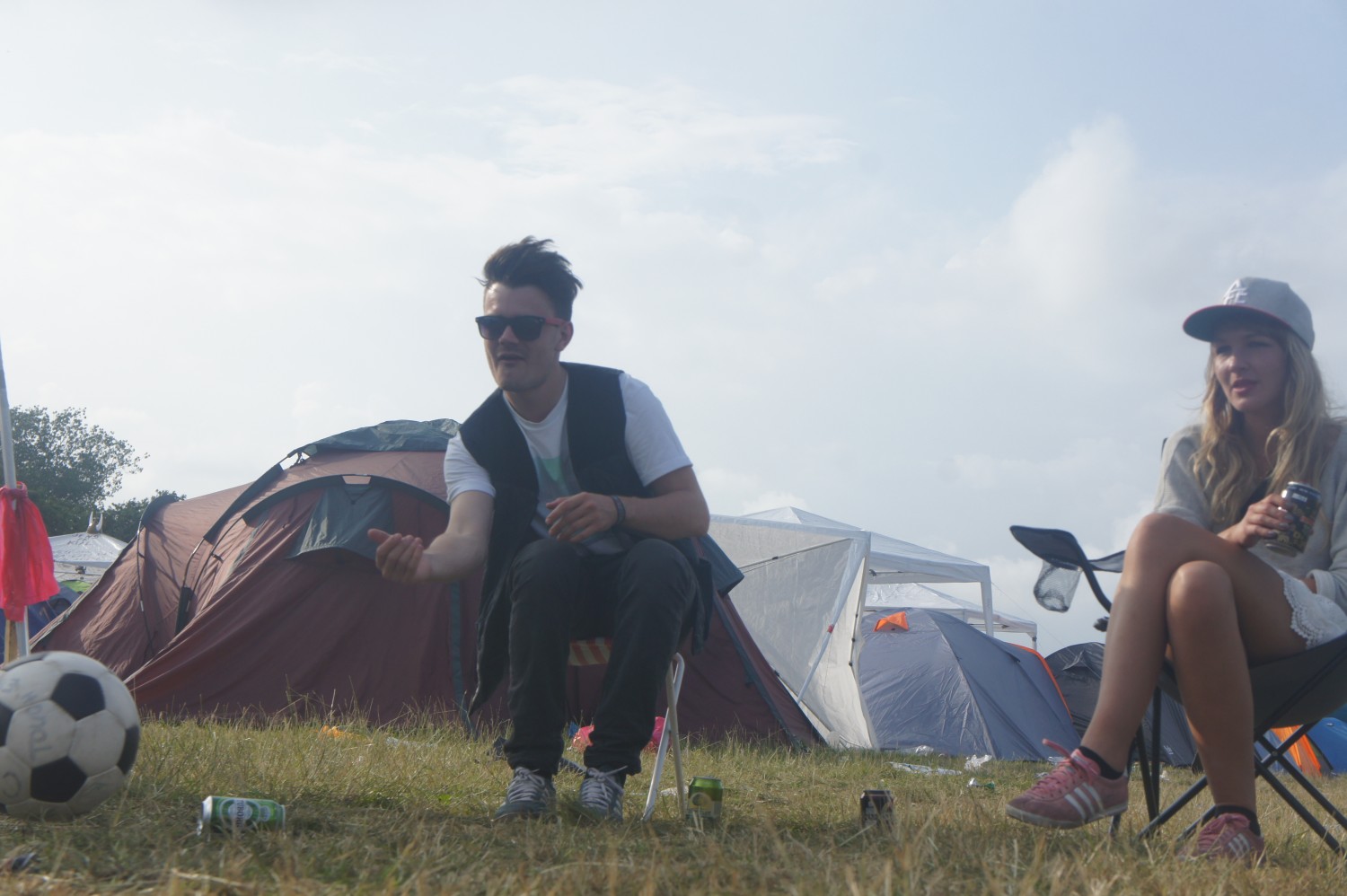 The next days are what you make them. Many choose to indulge in Roskilde’s national sport of Beer Ball, a football bowling game played from the comfort of a deck chair, beer in hand. The alleyways between campsites are taken over with this laconic pastime and anyone unwittingly straying into a game can expect a friendly tackle to the ground before being picked up, dusted off, hugged and only then allowed to continue on their way. Or a demand to perform an impromptu talent show. 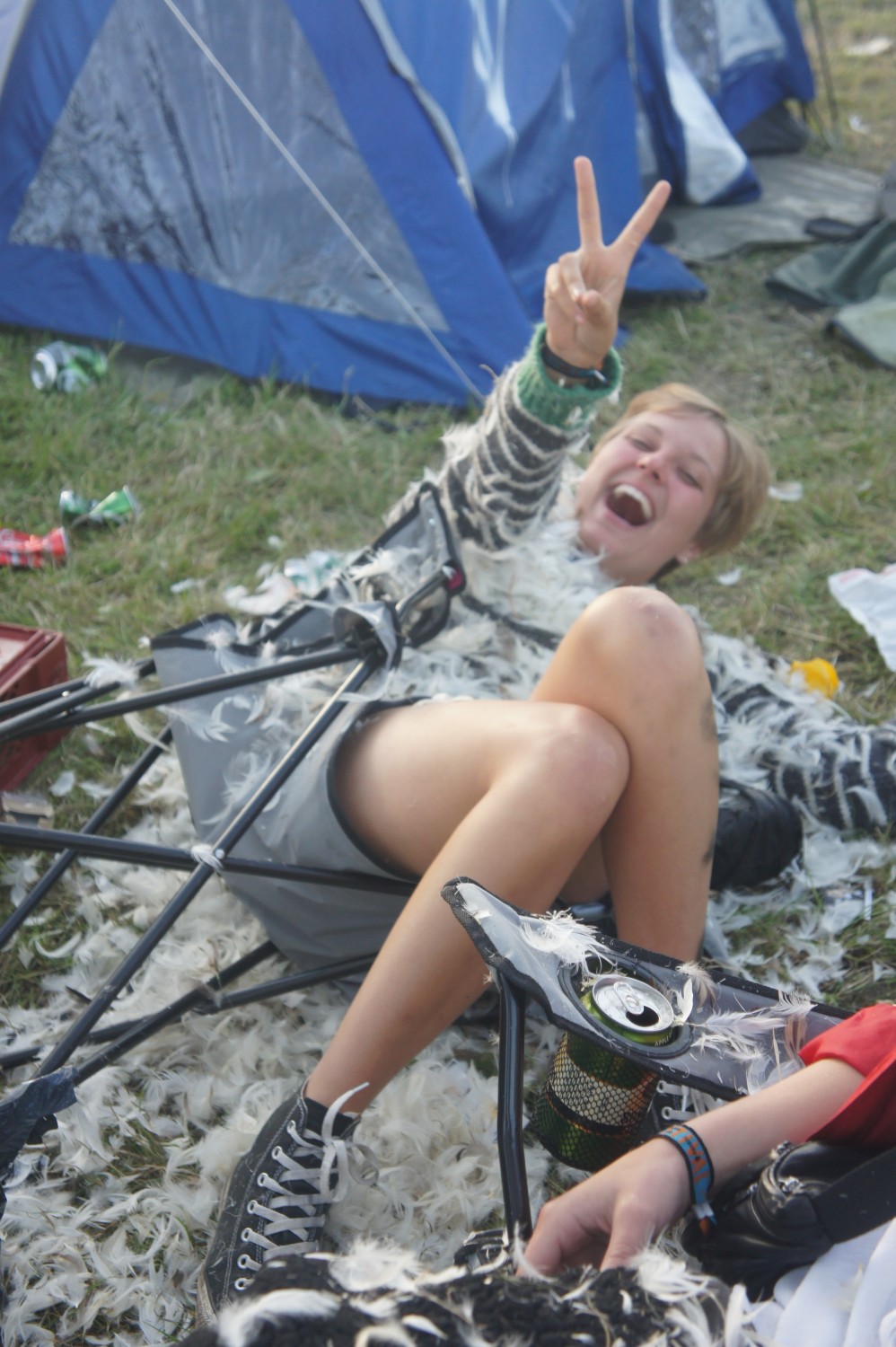 Those sound systems I mentioned earlier? At night dance parties pop up in campsites, on rocks, under shade canopies, in the Mad Max-esque superdome in the middle of the Dream City camp area and in the wake of the numerous speakerstacks on wheels which form the nucleii of  various raves-on-the-go. 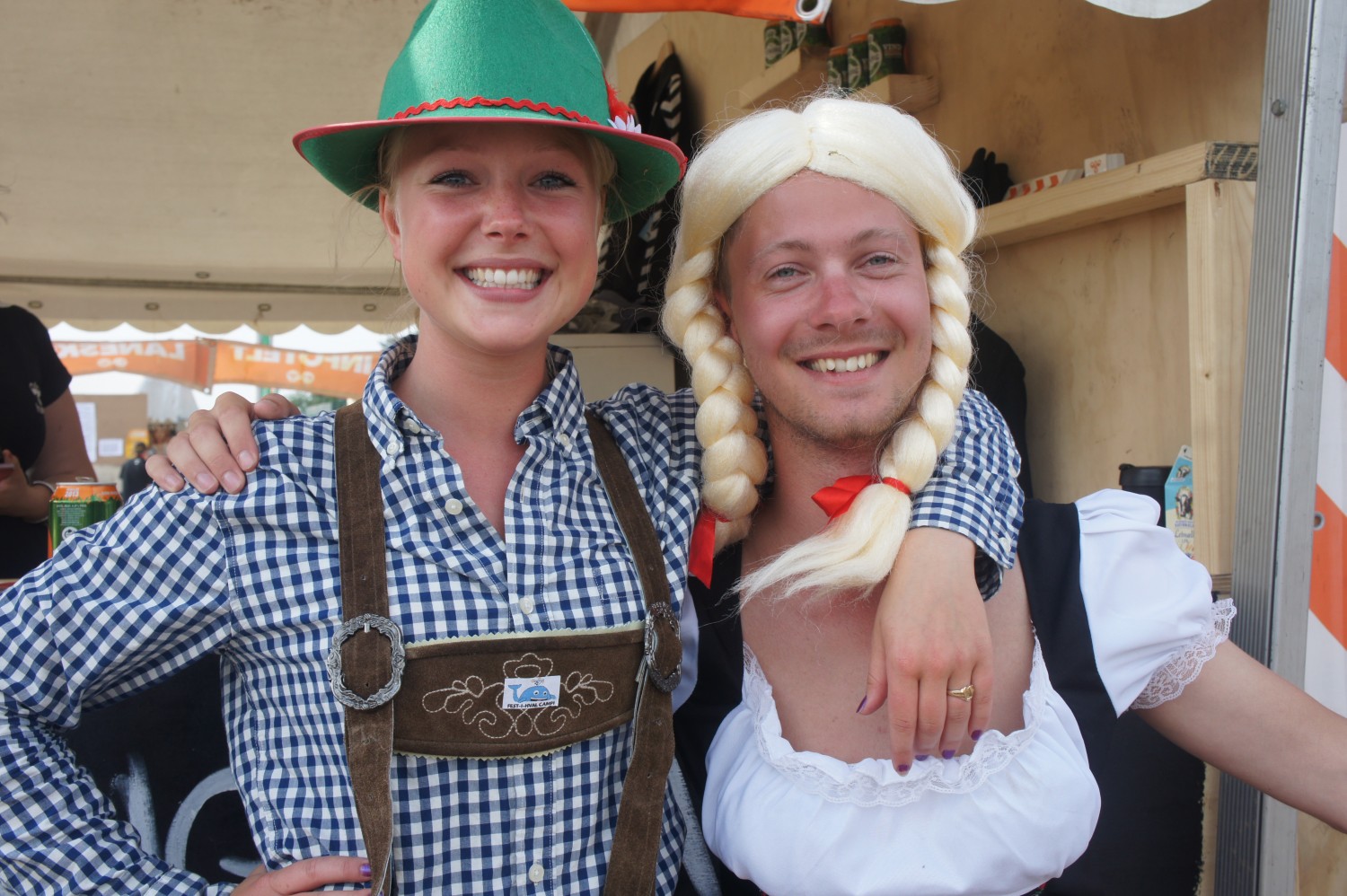 One of the most entertaining parts of this part of the festival is undoubtedly just walking around and meeting people. Roskilde appears to have retained a few enduring traits from its hippy origins in 1971 and one of them is a complete openness that will see you invited into countless campsites for a beer, a chat, a hug or any number of adventures campers and Roskilde’s creative staff cook up. 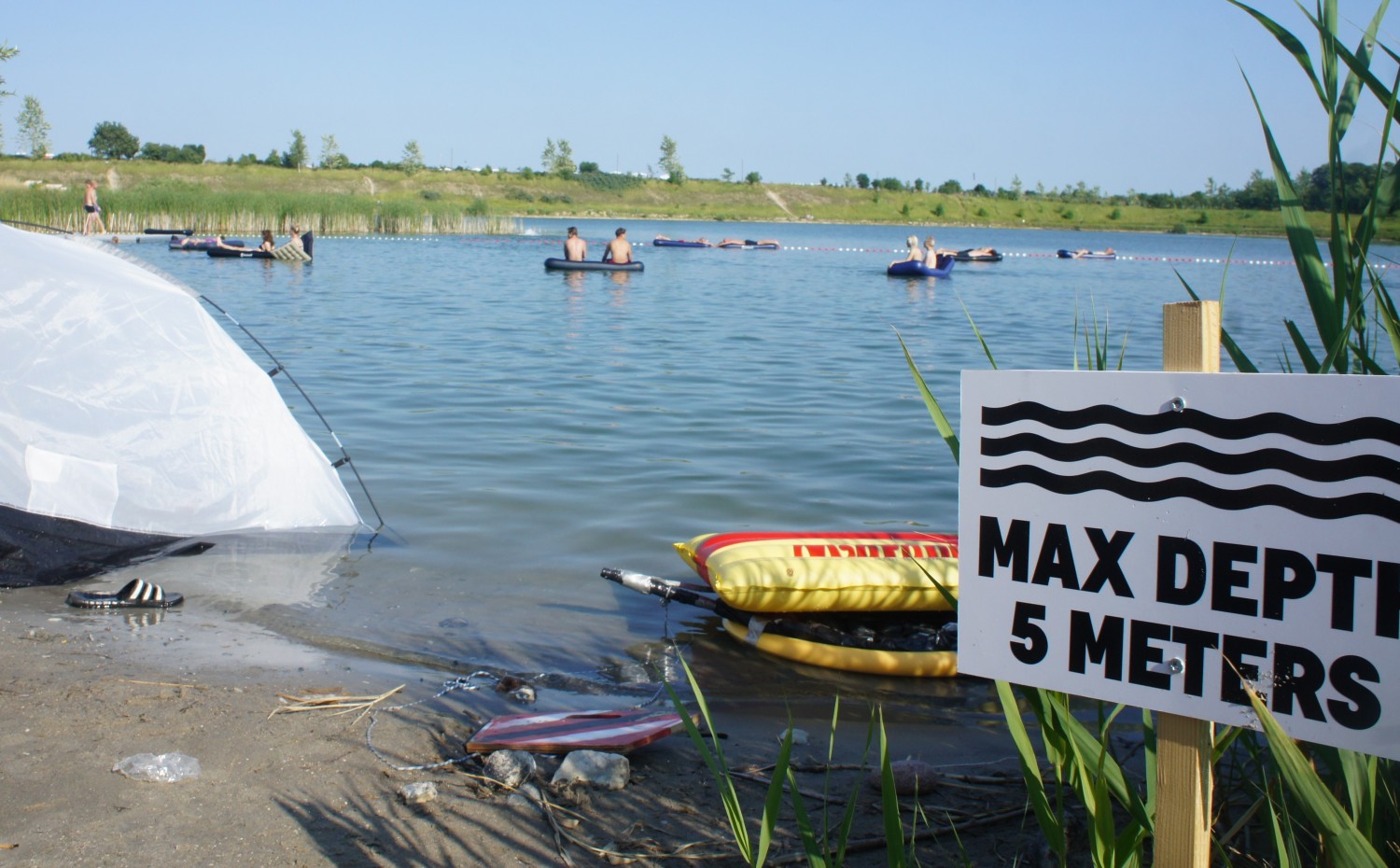 Summer Arrives At The Lake

Other options: Sleep (depending on where you are camping, not really an option in many cases); work (we had four eight-hour shifts working in a storage and battery-charing garderobe while we were there, sometimes on little sleep, but with coffee, fun customers and great workmates anything can happen); swimming or relaxing in hammocks, Finnish baths or the sauna at the lake; dropping by the Cinema zone; a climbing wall, boardgames and sports in Game City; exploring the creative paradise that is Dream City (where residents have lived since March, slowly building up their camps);  eating festival food that’s actually good for a change; catching a gig at the pre-festival music festival evenings; trying to spot the spontaneous happenings you will read about in the next day’s Orange Press newspaper; tracking down that person you met the night before… 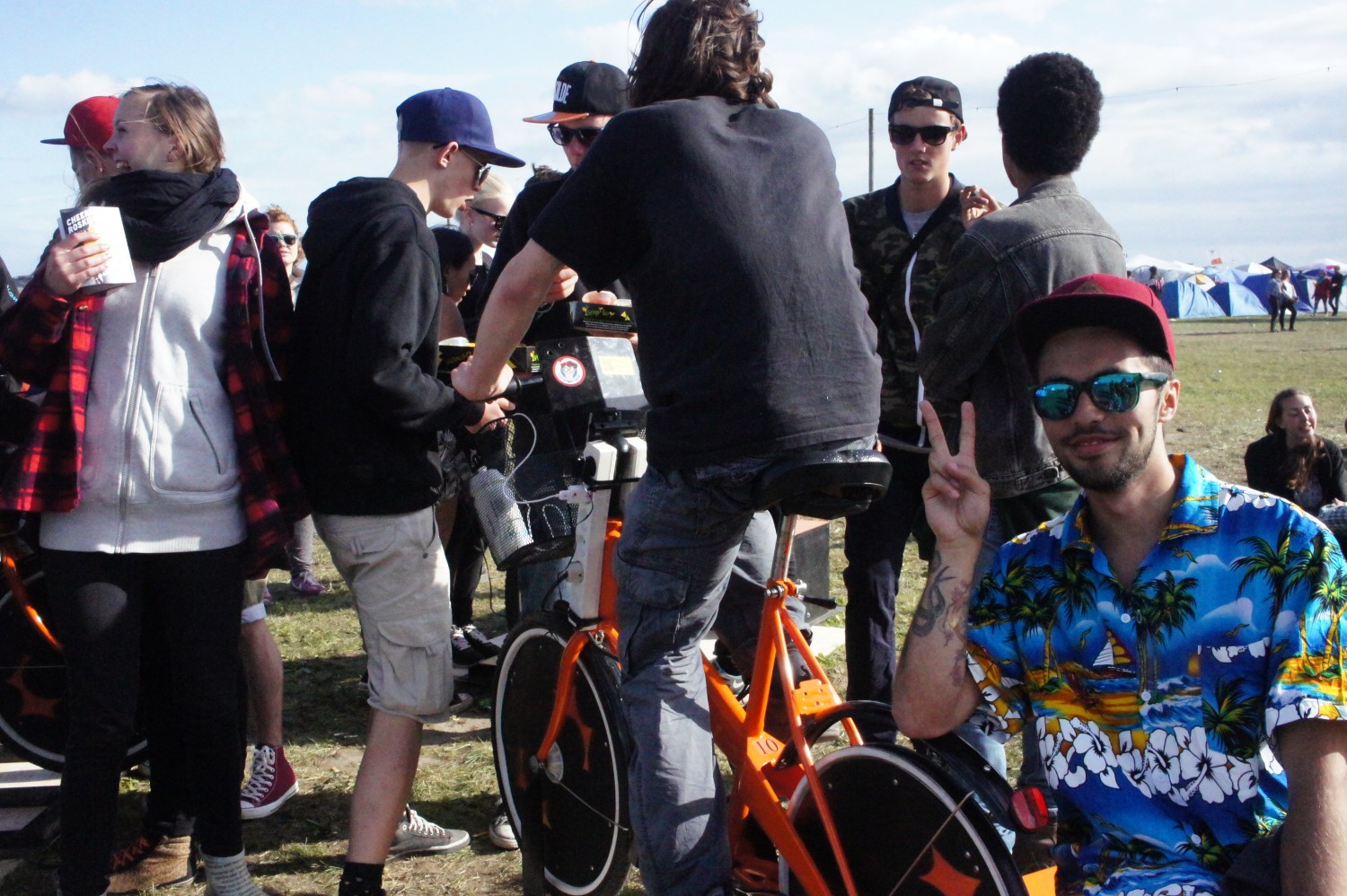 It’s up to you what you make of it. 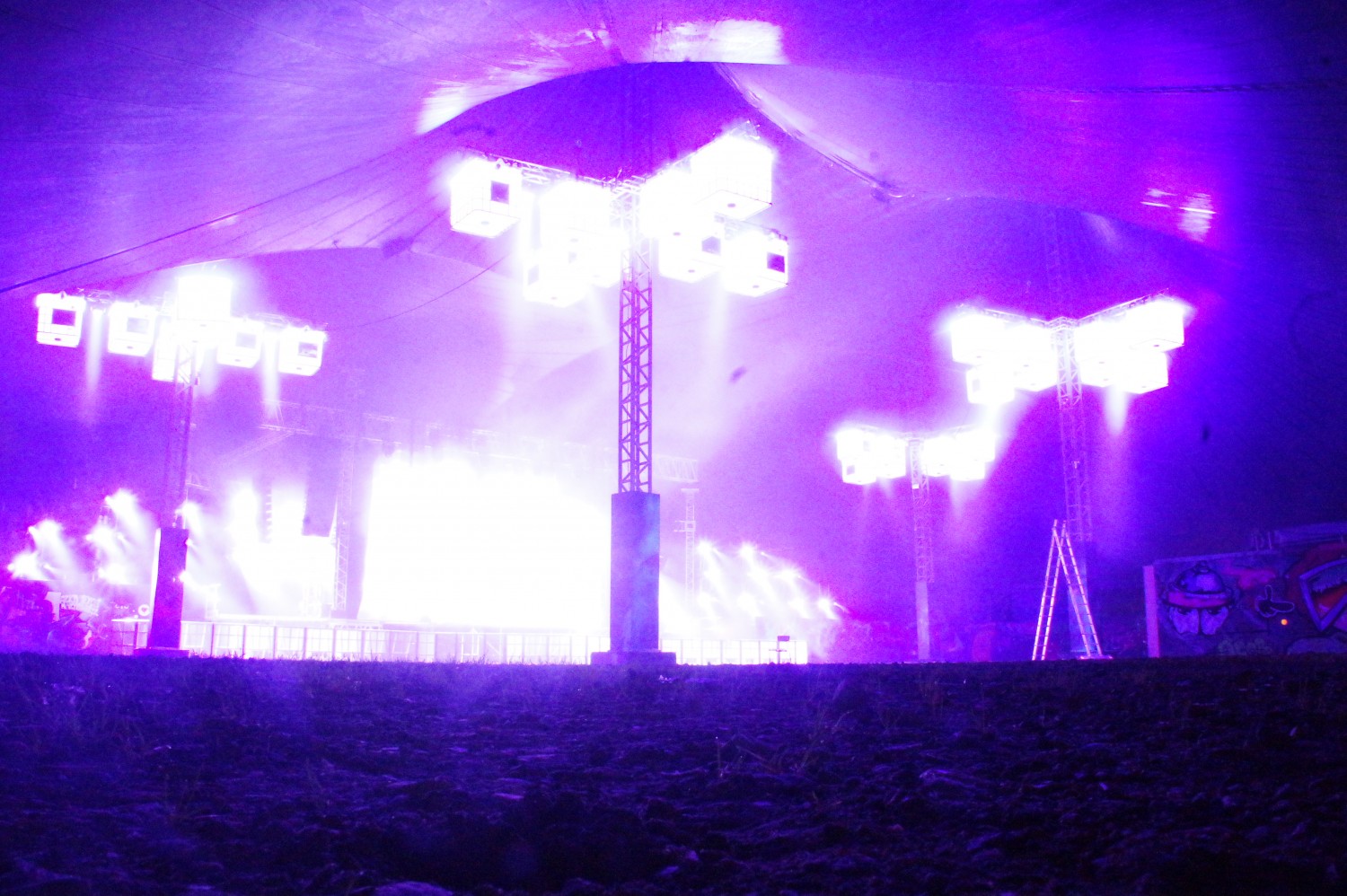 Before the music begins

And then the music proper starts. 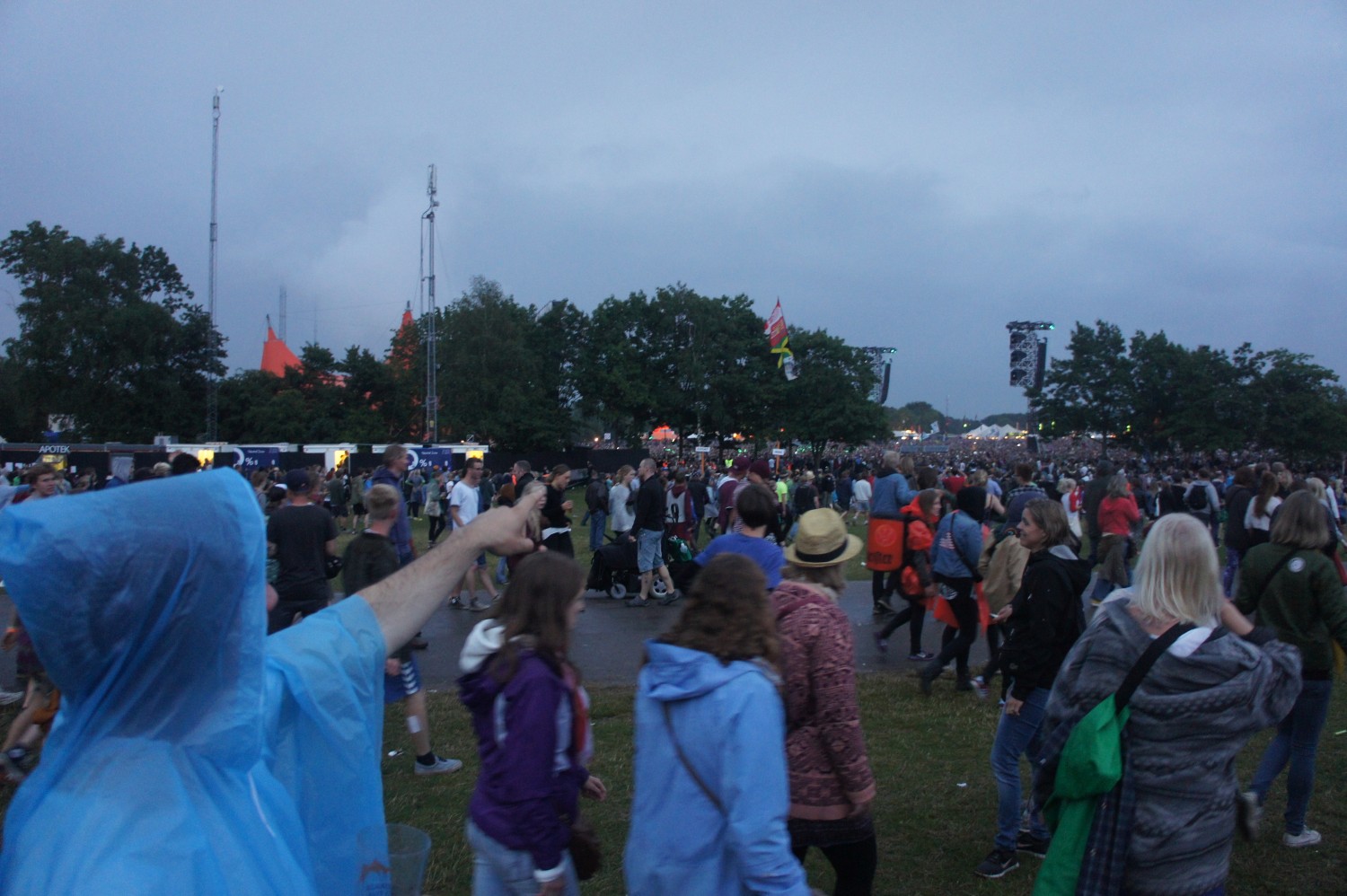 The energy of the camping festival begins to die off (not the least because many people have by now been partying for five nights in a row) and everyone begins excitedly comparing band timetables.

Somehow, the bands we had been looking forward to for so long had almost become a distraction, so ensconced we were in this alternative reality of the camping ‘warm-up’. However, it didn’t take long to shake the feeling. Seeing an enormous crowd stretching out before the Orange Stage during Slipknot awoke our latent enthusiasm, despite not liking Slipknot one iota. 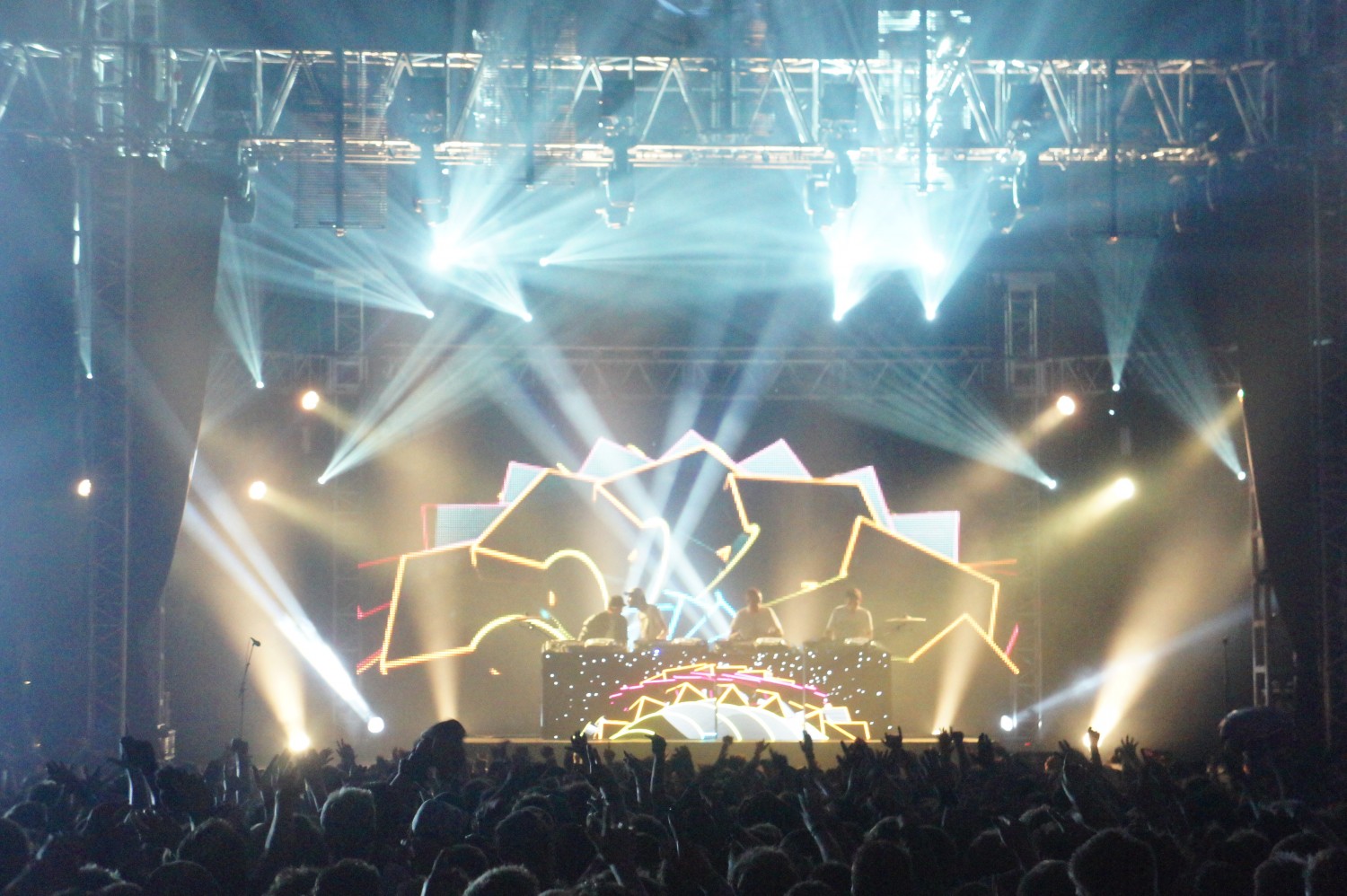 The Lumineers, performances from French electronic acts Chinese Man and C2C, English wunderkind Jake Bugg and an all-star collective of Swedish artists (Lykke Li, Miike Snow, Peter, Bjorn & John and so forth) collaborating with a massive stage show under the name ‘Ingrid’ all cemented the feeling. Roskilde had finally arrived. 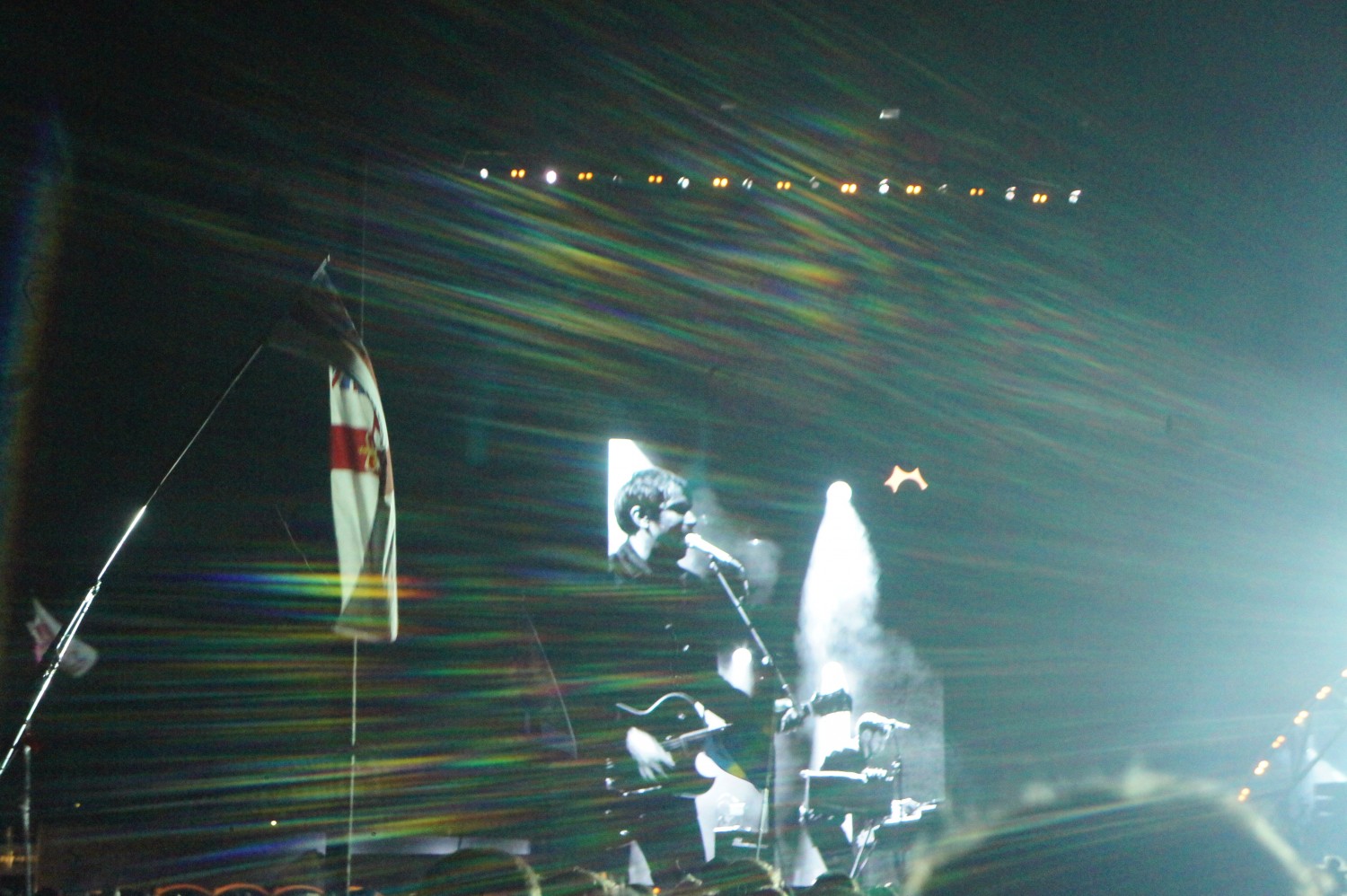 And so it continued. Friday evening featured Rihanna, which was responsible for the particularly young makeup of the festival this year (normally, the festival-goers are a little older). 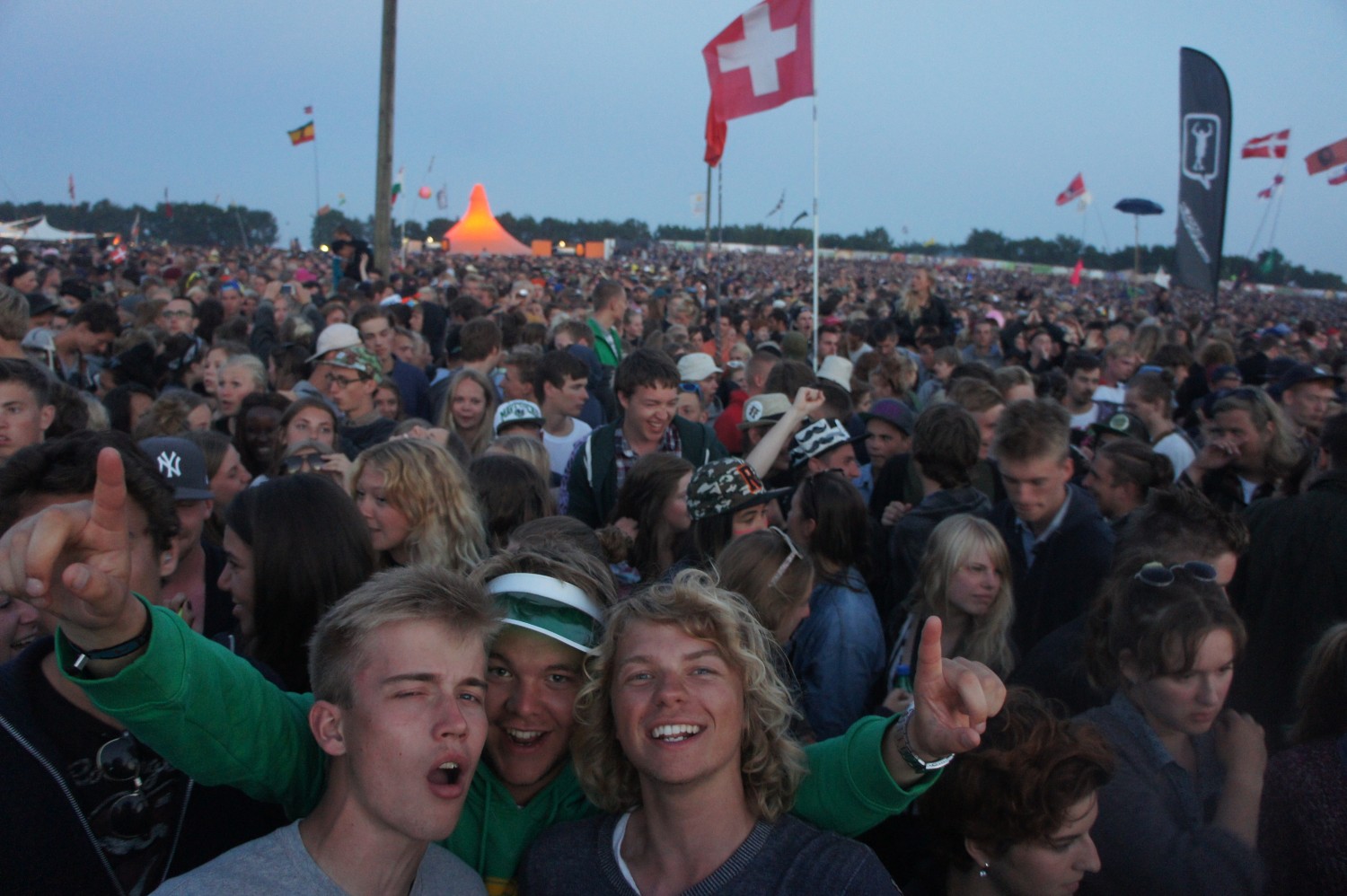 17 year-old girls make up the most brutal crowd I have ever seen and my god do they have sharp elbows when they think you’re getting in the way of seeing their precious popstar. ‘Meh’ was the general reaction to her performance, which seems to be an experimental move amongst a largely alternative line-up. The synth-rave stylings of Crystal Castles was a good antidote to Rihanna, but this photograph says we were up for making the most of the concert regardless. 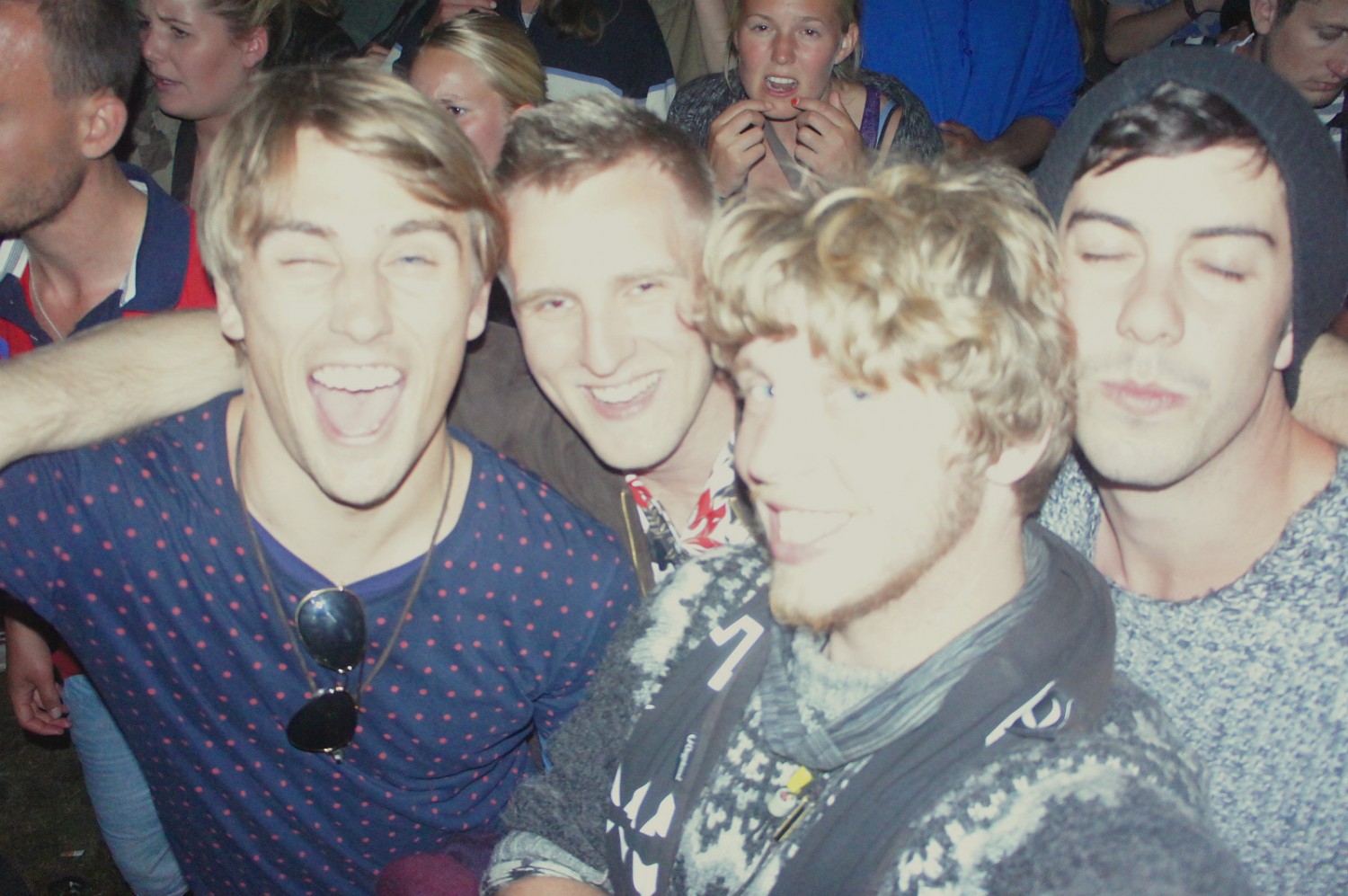 Note that just as in the Netherlands, I now have another disguise – Viking beard and Scandinavian-style woolly jersey – an unintended combination which seemed to convince everyone I am from Iceland.

There Is Always One

By this point in the festival, the camping grounds had become a wasteland, with a week’s worth of accumulated camping rubbish starting to pile up (especially with the younger Rihanna crowds who I assume still have to be nagged to clean their room at home). Paradise looks like a slum village.

Saturday was the day of our last shift at Garderobe L. We had already heard The National playing the previous day, our shack rattling to the sound of Ohio Bloodbuzz while we stacked iPhones for charging. We were absolutely dead by this time, but driven by the possibility of catching the end of Metallica at 11pm.

Running high on coffee, our core team of Lithuanians, Danes and Kiwis ran towards the Orange Stage to find… Metallica only just beginning due to delays! 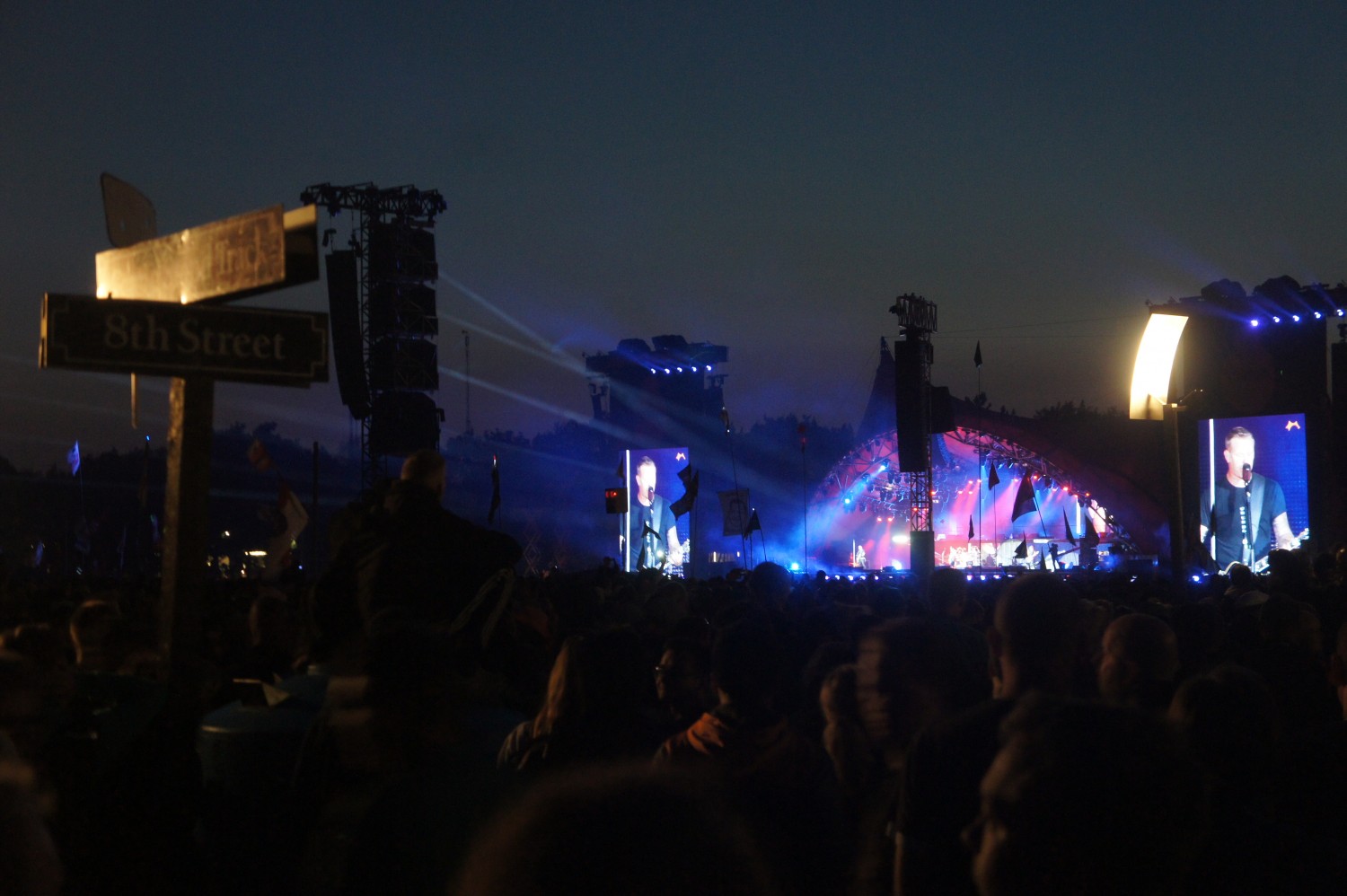 All Roads Lead To Metallica

“Roskilde, you make Metallica feel… Goooood”, rasped singer James Hetfield, in between bouts of frenzied rocking for a crowd already delirious to see their hometown hero – Danish drummer Lars Ulrich.  Sigur Ros next up over at Arena stage was a step-down in intensity, but the outlandish Icelandish post-rockers delivered an ethereal set defined by frontman Jonsi’s falsetto cries, vast soundscapes and violin bowmanship on guitar. UK Drum & Bass legends Chase & Status picked up the reins and pounded the crowd with hit after bass-heavy-hit, causing multiple circles of death to form in front of the Orange Stage. 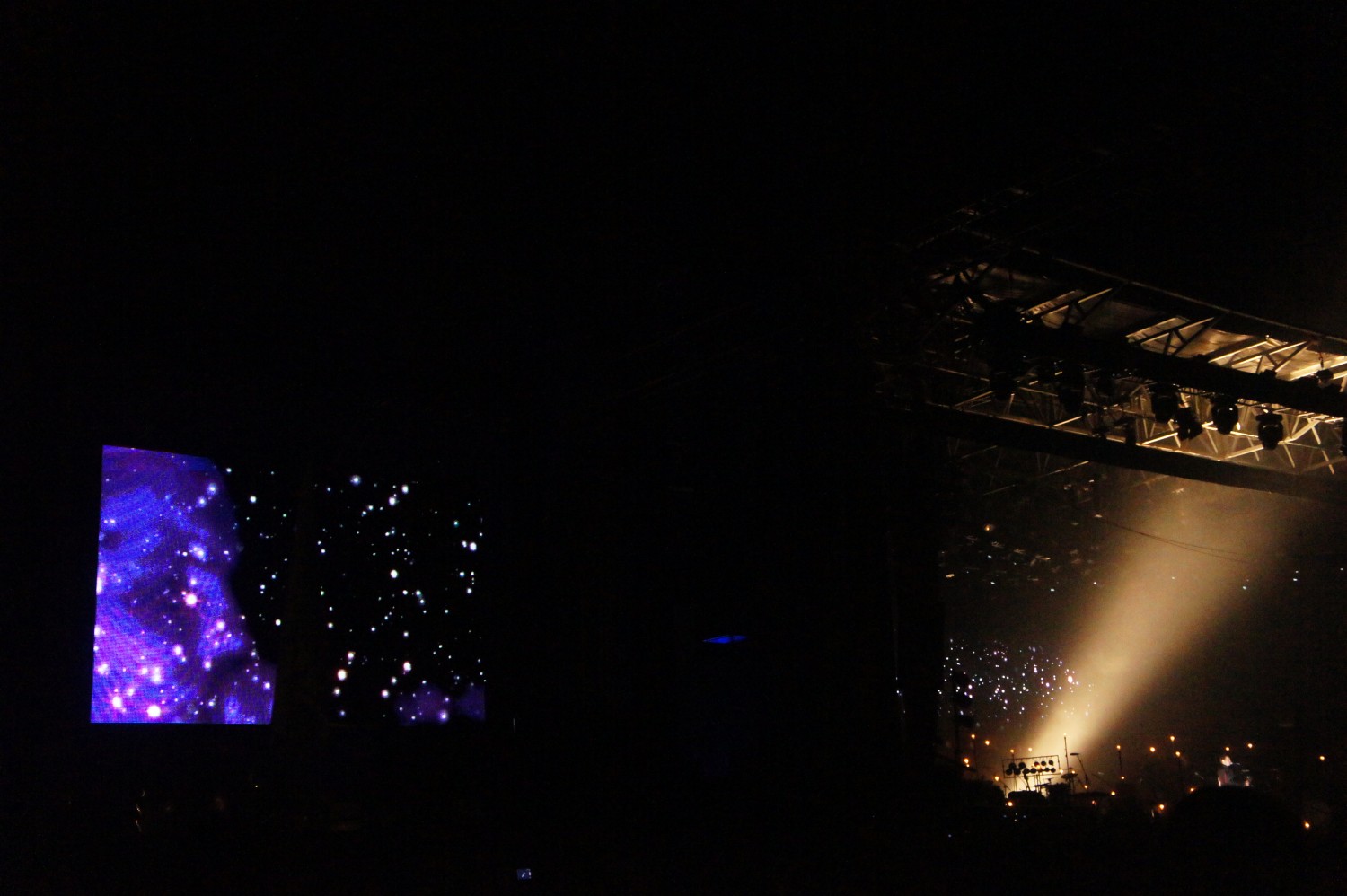 All of a sudden, the last day of Roskilde had arrived. 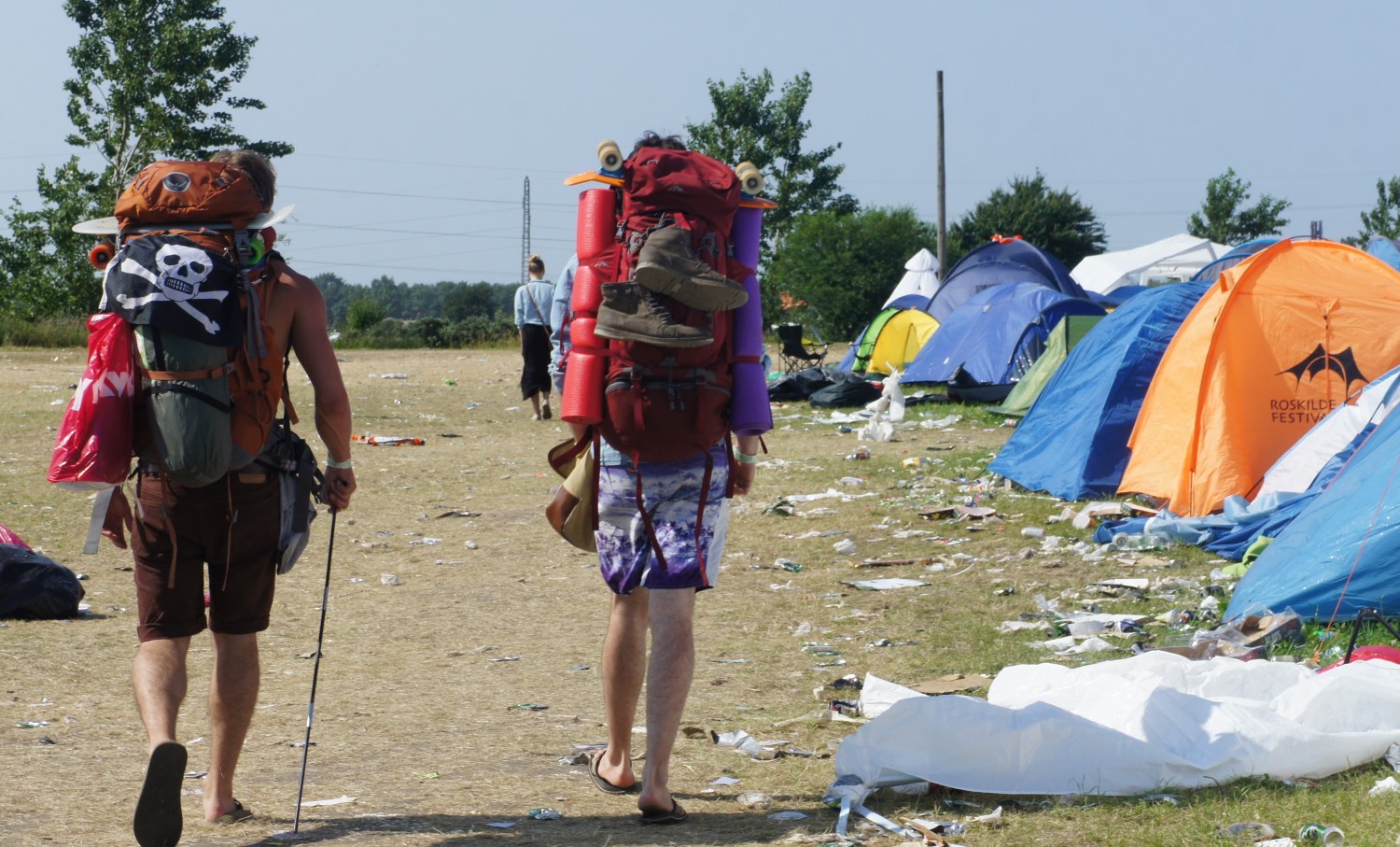 If the rubbish piles had previously made certain camp sites look like slum villages, the departing campers had the effect of rendering Roskilde as a post-apocalyptic dream. Those staying for the last night’s music and even the last night of camping put all their gear into storage.

Sunday night has earned the reputation of ‘hell night’, when people go a little crazy; drinking and eating the last remaining festival supplies, sifting through the leftover gear from camps (and sometimes stealing and ripping the gear of those who decide to remain for the final night) and even a few burning tents. Years ago, everything left over would be thrown on a huge pile and lit in a pagan-esque ending ritual. Now, the festival is trying to move in a more sustainable (and possibly safer) direction and as much of the left over equipment that can be salvaged is donated to the homeless.

After the slow and sad packing down of tents, saying goodbye to neighbours and basking in the sun at the lake, we made our way to Queens of the Stone Age for one last celebration in the sun before departing for Copenhagen. We sadly missed Kraftwerk’s 3D performance, but at this point we really needed to find our friend’s house; a safe haven to crash and recuperate. 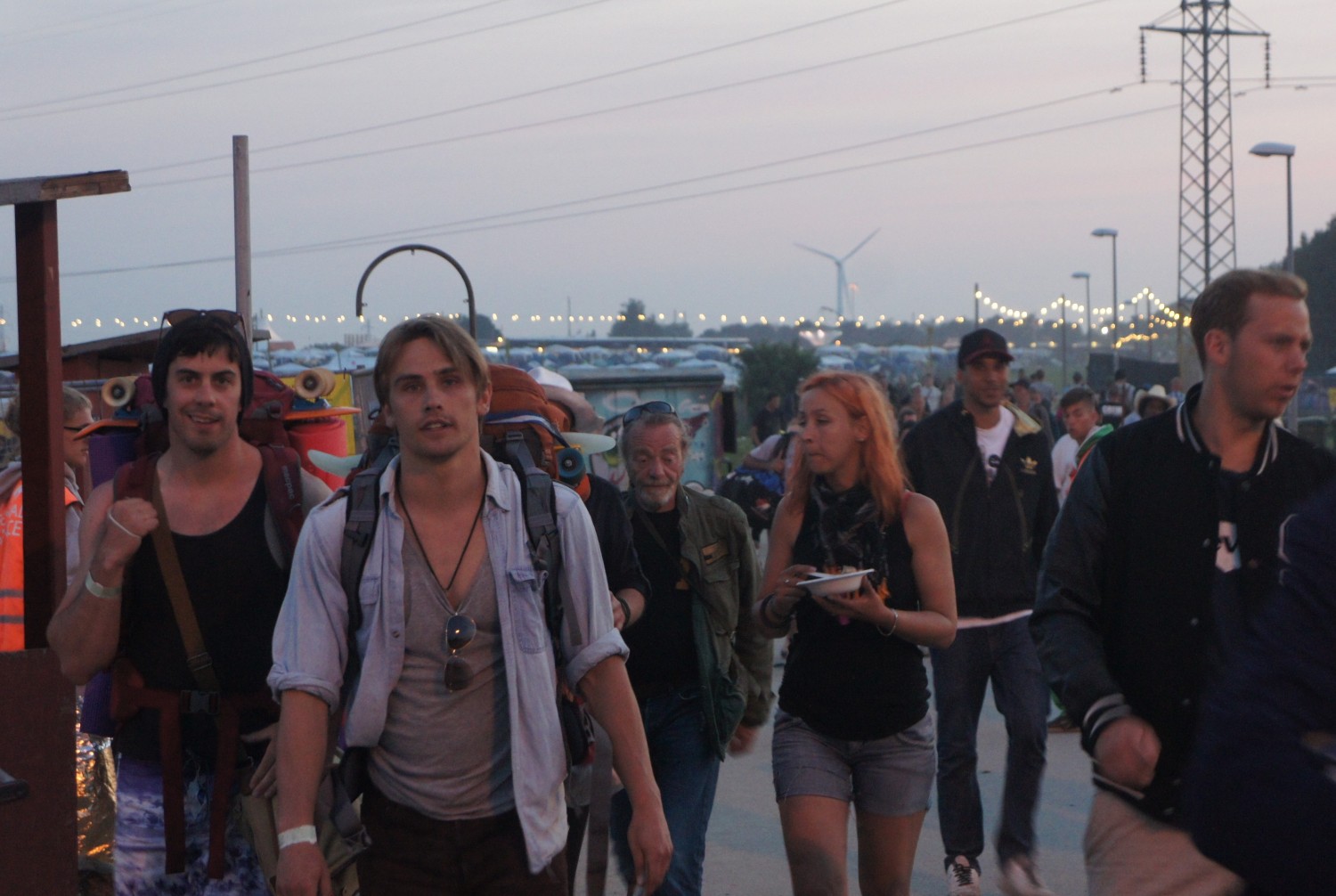 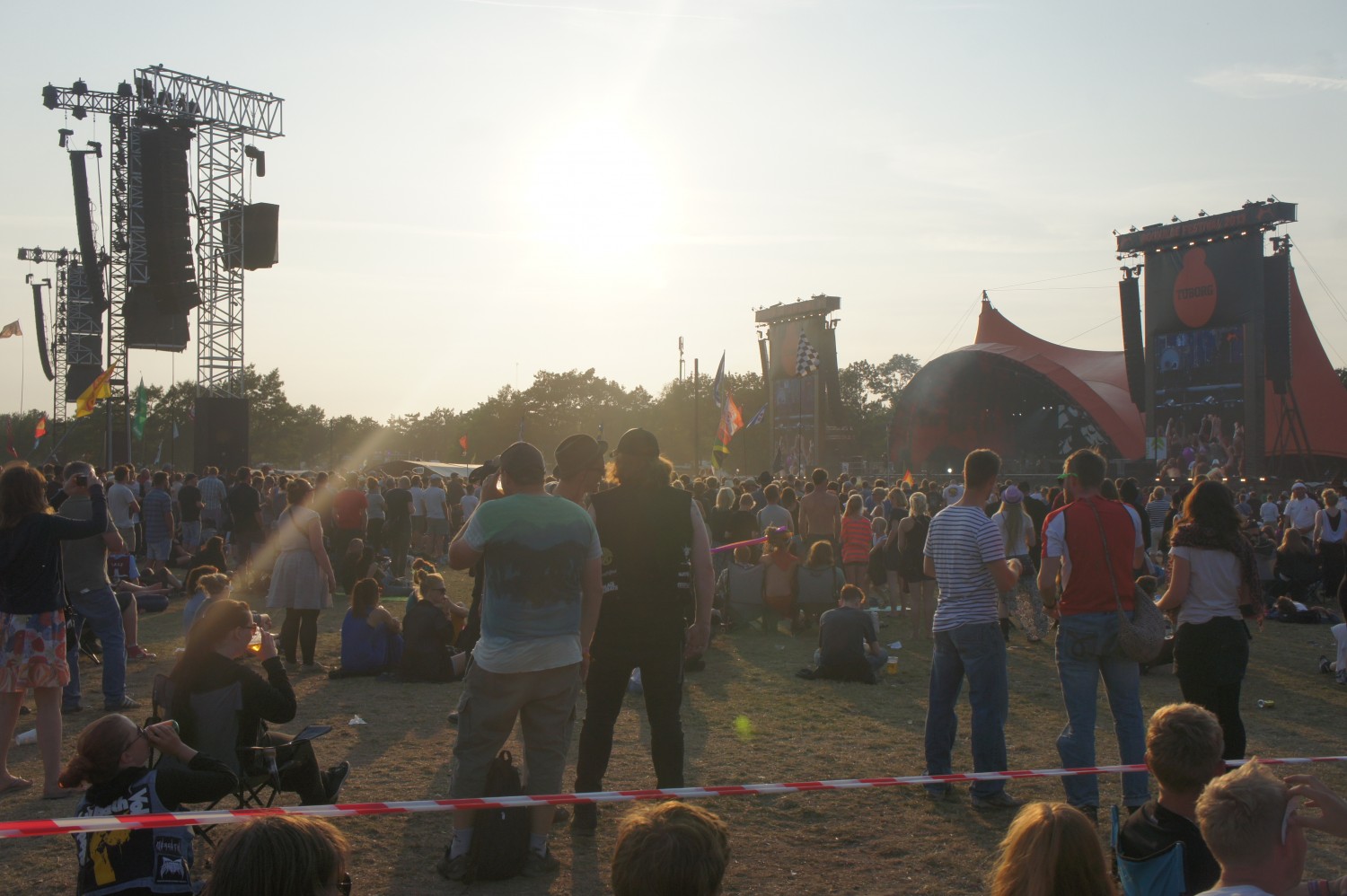